2015 FINAL: Duffield are the Champions

Duffield are the Champions

Losers of last year’s final after being two-nil up, runaway winners of Division A in this year’s League stage, last-gasp narrow winners against defending champions Surrey in the semi-finals, Duffield are the PSL Champions after beating Division B winners St George’s in tonight’s final at Hunts County.

Missing their top player Nick Matthew, who failed a fitness test on his ankle just yesterday, Duffield were nonetheless buoyed by the return from her mini-sabbatical of Laura Massaro. 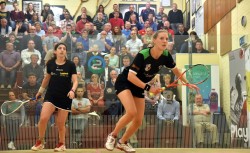 Massaro it was who gave the Derbyshire side the lead as she beat Yathreb Adel, who after missing Tuesday’s semi-final had just flown back in from the Egyptian League finals. Adel started strongly, taking the first and she had a game ball at 10-9 in the second too, but Massaro, improving as the match went on, saved that and went on to win in four, taking the last game eleven-love.

“This is the exact type of atmosphere and match you’d want to make a comeback in after a layoff,” said a delighted Massaro.

“Regardless of the result it feels really good to be back in the competitive environment, and that’s what I was missing at the beginning of the year. I felt a bit match rusty at the start but I improved as the match went on, so that’s all positive. I just hope the boys can finish it off now!” 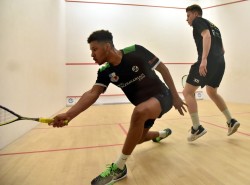 On the outside court there was more good news for Duffield as Richie Fallows beat Charles Sharpes to put Duffield two-nil ahead. Sharpes fought back after losing the first two games, but Fallows was not to be denied as he took the fourth 11-7 to his and the team’s delight.

“I’ve lost to Charles in a couple of recent events , but this was the big one, I really wanted to win this one,” said Fallows. “I haven’t done so well in the PSL matches this season so I wanted to show Felix what I can do.”

In the next pair of matches everything was looking rosy for Duffield as Declan James and Chris Simpson both took their first games within seconds of each other. That was when the St George’s fightback started though, as Borja Golan and Joe Lee both levelled their matches. 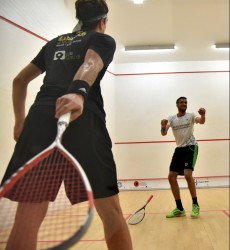 The crucial match turned out to be on the side court in a fiercely contested and sometimes contentious match. James regained the lead but Lee levelled again with a roar of delight. But it was the Duffield man who held sway in the decider, taking it 11/5 after 79 minutes to put Duffield in an unassailable three-nil lead.

“I felt pretty relaxed on there,” said James, “I tried to focus on just playing squash. Joe was getting a bit agitated with some of the decisions, I tried not to let that affect me, tried to let my squash do the talking.

“It’s great to get the win to finish off a good season, and it feels good to win it for Felix.”

By then the top string match on the show court was also into the fifth, but here it was Golan who took it, after 98 minutes, to put St George’s on the scoreboard.

The last match, between number twos Joel Hinds and Tom Richards, was an entertaining best-of-three with Richards winning to make the final score Duffield 3, St George’s 2. 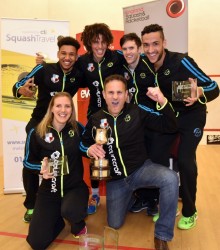 “I’ve been involved for 23 years as sponsor but this is my 7th year as manager, so it feels great to win the title for the first time in that role.

“The key to this win is the players, the team have been fantastic all season, they gave me everything they had from the word go and no manager could ask for more. They’ve done our supporters, me, and themselves proud.

“We didn’t know what to expect at Hunts County, but it’s a great venue and a fantastic club, superbly organised and we can’t wait to play here again.”

As Felix lifted the trophy he told the crowd, “it feels like lifting the FA Cup … it’s coming home!!!”

more photos (226) in the Picasa Gallery