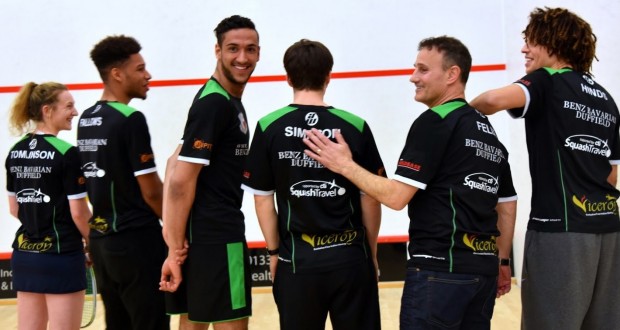 Benz-Bavarian Duffield are in the Premier Squash League final and, after pulling off the most implausible of semi-final victories, anything is possible. 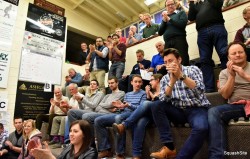 What a night for the Derbyshire club! Deprived of their two biggest stars and up against the champions of the last five years, they somehow beat Surrey 3-2 in an extraordinary match.

It had everything, including a dash to hospital to make sure one match could be finished. There was blood and sweat but, thankfully, no need for tears. 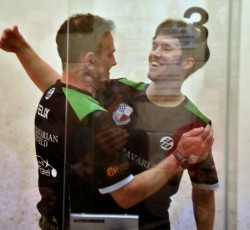 “That was probably the most epic night in the history of Duffield Squash Club,” said team manager Felix Frixou.

“You could not write a film script like that. It was like Rocky climbing off the canvas to land the last punch. It was an unbelievable night.”

Frixou could have been forgiven for fearing that his hopes were out for the count when, already without Laura Massaro, Nick Matthew injured his ankle in El Gouna.

Duffield have made a habit of beating the odds in recent years but Frixou admitted even he doubted they could win this one. 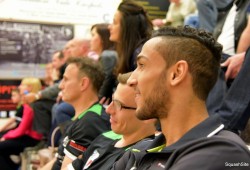 “No way,” he added. “I am an optimist and I would say I was about 35% optimistic we would win it but, if I’m honest, I thought we would probably lose.

“I had a good feeling about three and four. I knew Millie would be up against it but, somewhere inside me, I had a thought that Joel or Chris might just pull it out for us. 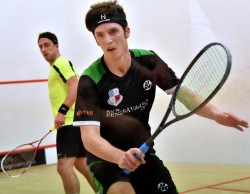 “I thought it might be Joel, in truth, and when Granty came back to win I shouldn’t really say but my head did drop a bit.

“It was such a big ask for Chris against Pete Barker but I never gave up because we’ve seen all season that Chris is like a dog with a bone and if you give him any sort of chance, he’ll take it – and he turned it around.”

The match score was 2-2 when Chris Simpson stepped on to court for the decider against Barker and when Surrey’s world number eight took the first two games 11-6, 12-10, the signs were ominous. 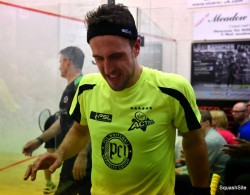 When Simpson went to change shirts between games, Matthew, there to offer whatever motivation he could, took the shirt off his own back to give to his team-mate.

The gesture lifted Simpson, though only after Barker had pushed him within two points of defeat at 9-4.

Simpson clawed back to 9-9 when, in a contest of incredible intensity, Barker twisted and hurt his knee.

After the Duffield player won that game 12-10, Barker asked for a three-minute injury break but he could not recover. 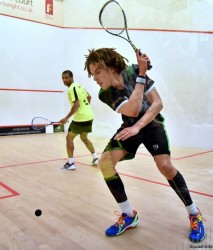 The fourth went to Duffield 11-1 and, at 4-0 in the next, Barker gave up and offered his hand. 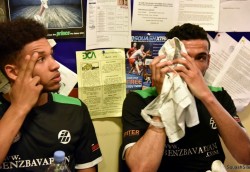 That match started earlier than expected when Declan James’ meeting with Piedro Schweertman had to be suspended because of injury.

Surrey’s Dutchman was 6-3 up in the first with James appearing nervous when Schweertman’s racquet accidentally caught the Duffield player just above the eyebrow.

It caused a nasty cut. Thankfully for Duffield, a doctor from the Royal Derby Hospital was in the crowd and he was able to make a call to a colleague on duty to treat it swiftly.

James was driven to hospital, the cut was glued and he was back in half an hour. 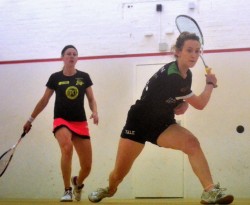 The injury to Matthew gave Richie Fallows the chance to claim his first PSL win for Duffield and, sweeter still, it came against his former club, beating Lyell Fuller 11-9, 11-7, 11-6.

Millie Tomlinson had arguably the toughest challenge of all against world number three Alison Waters but after losing the first two games, she gave the Surrey star a terrific fright.

Tomlinson levelled 11-8, 11-6 and though the decider went to Waters 11-6, it was a performance that can only do wonders for the Duffield youngster’s self-belief. 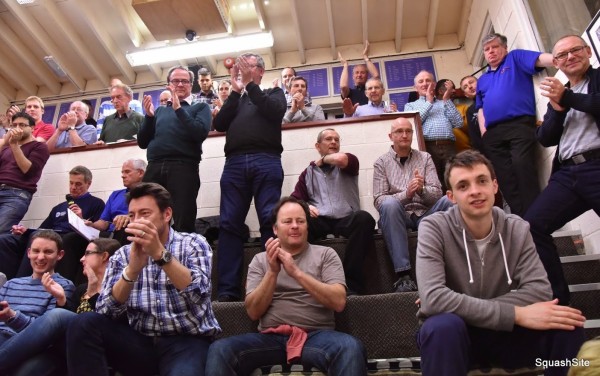