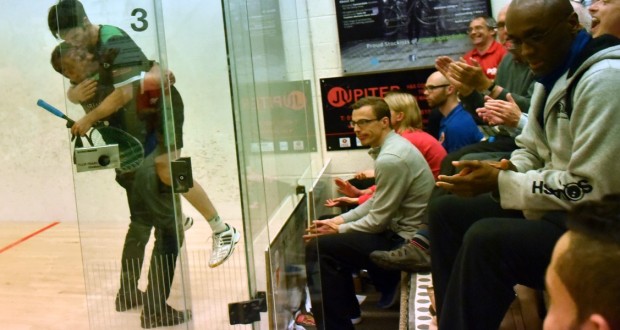 The first semi-final of the 2014/15 season was a repeat of last season’s final with Division A winners Benz-Bavarian Duffield at home against reigning champions Virgin Active Surrey HRC. Then, Surrey came back from two-nil down to win the title, but tonight it was Duffield who prevailed 3-2 in a match full of ebbs and flows to deny Surrey a sixth successive appearance in the final.

The match started with Declan James v Piedro Schweertman on the show court, but in the middle of the first game the Dutchman’s racket clipped James’ eyebrow, necessitating a break for treatment – James actually had the small cut “glued up”.

Meanwhile on the other court Alison Waters looked to be in control as she took a two game lead over Millie Tomlinson, but in a match which required a good deal of decisions from the referee the Duffield youngster fought back to force a decider. The world number three wasn’t to be denied though as Waters took the fifth to put Surrey ahead.

“It wasn’t a pretty match,” admitted Waters, “I’m just glad to be able to put the team ahead – and to keep my unbeaten record!”

On the showcourt Joel Hinds and Adrian Grant went on, and to the delight of the crowd it was the Duffield youngster who took two close first games. Grant though, playing his “first competitive match for months” but famed as a slow starter and loving his five setters, took the next two games both 11/9 to force a decider.

While that was in progress Richie Fallows levelled the match as he beat Surrey’s Lyell Fuller in straight games, but just moments later Grant put Surrey back in front as he took the fifth 11/5.

“Happy to get the win to keep us in it,” said Fallows, “I’ve been playing this match in my head for three days now! We’ve played so many times, in every event possible really, and I’ve always beaten him but I hadn’t won any PSL matches this season so I was nervous to start with, but happy with how I played and managed to control it in the end.”

James and Schweertman then resumed, and it was past 10pm when the Duffield man took the first game 14/12, doubled his advantage 11/6 and then held off recovery from the Dutchman to close out the match 11/9 and set up the top string decider.

“I sweated blood for the cause out there tonight,” quipped James. “It was difficult with the injury break, and it was very tight in the the first and third games but I was pleased with how I played.”

Chris Simpson had lost just once this season for Duffield, but his opponent today was Surrey’s Peter Barker, who had won all his PSL matches including two against world number one Mohamed Elshorbagy.

Barker it was who took the initiative, controlling the first and then holding on at the end of a tough second to lead 11/6, 12/10. Surrey looked to have the match in the bag when Barker led 9-4 in the third, but Simpson fought back with six points in a row to earn game ball 10-9.

Barker saved that with a stroke as he hit his opponent from the back of the court, but Simpson took the next two points to pull a game back then eased through the fourth with Barker looking decidedly uncomfortable.

Barker took an injury timeout before the start of the fifth, but to no avail as he was struggling to compete, Simpson taking a 4-0 lead before Barker offered his hand and Duffield were in the final.

“It’s always a shame when a player has to retire with injury,” said Duffield manager Felix Frixou, “but what a night’s entertainment and what a great performance from the team, I’m proud of them all.

“In all the 23 years I’ve been involved with the PSL that’s probably the most tense, exciting, on edge match ever. Only against Surrey can this happen, and almost a role reversal from last year.”

Surrey manager Pete Smith said: “It was a great match, it’s a pity it had to end like that but that’s sport, and good luck to Duffield in the final.”

This season’s semi-finals – which until 2008 were on a home and away basis – will be held on separate dates mainly to avoid clashes with player commitments to PSA/WSA tournaments around the world, with St George’s taking on Coolhurst on 5th May, just two days before the final.

Duffield and Surrey both come into the match with a Won 8 Lost 2 record in the league season, both enjoying a tremendous start, winning all five of their first half matches. Duffield added another three wins to clinch top position in Division A and their semi-final spot early before losing their last two, while Surrey lost the first two matches in the second half which left them playing catch-up behind eventual Division B winners St George’s.

Neither side are able to field full-strength teams. Duffield are missing the injured Nick Matthew and resting Laura Massaro while Surrey are without Fares Dessouki, Gregoire Marche and Mazen Hesham, but are boosted by the return of Adrian Grant, flying in from LA for the match.

It’s been a hard battle, for everyone concerned to make this the memorable day this kind of competition deserves.

I understand the logistics in making sure everyone is going to be happy with date changes, which is testament to the very busy schedule of our Professional players.

My sympathy goes out to the thankless task of any Governing body in trying to keep everyone happy, it never will happen.

As Manager of Duffield Benz Bavarian, will pledge to make this the memorable game it deserves, not just from the point of making our fellow Semi Finalists so welcome, and traveling such a long way, but to show all the Players, home and Away, that we are privileged to have such an array of talented individuals competing to the highest order, and looking forward to an evening of entertainment of the highest order.

Crystal Ball’s assessment is that while Surrey start favourites in the top and bottom  strings, anything could happen in the middle order, so an exciting night is in store in front of the traditional sellout crowd at Duffield.

Previous R10: Nottingham lose out at the last
Next Duffield pull off implausible semi-final win