It will be an all-Surrey PSL final next week after Virgin Active Surrey and 9 Telecom St George’s Hill won two nailbiting semi-finals which both went down to deciding matches.

Six-time champions Surrey travelled to Division A winners Everards Leicester, in just their second season in the league, and quickly took the lead through Alison Waters, just back from helping England win another European Team title in Warsaw.

Ben Coleman put Leicester level with an impressive win over Peter Barker, but Charles Sharpes came from 1-2 down to beat Angus Gillams and restore Surrey’s lead.  Leicester number one Daryl Selby set up the decider as he beat Egyptian Karim Abdel Gawad in straight games, but it was Surrey’s Lyell Fuller who settled the match as he beat Leicester skipper Darren Lewis in four games.

Division B winners St George’s hosted defending champions Benz Bavarian Duffield in a repeat of last year’s final, and as in the other match it was the visitors who took the lead via the women’s match, Duffield’s Laura Massaro easing past Dom Lloyd-Walter in three.

Local favourite Charlie Lee drew St Goerge’s level, but in the second string match Duffield’s Declan James put in a great performance to beat Tom Richards in three to put Duffield back in front.  St George’s Dutchman Dylan Bennett levelled the match to set up a decider between top strings Borja Golan and Chris Simpson.  In front  of a full-house crowd this went the distance too, but ultimately it was St George’s Golan who gained some revenge for last year’s final disappointment as he won a see-saw encounter to dethrone Duffield and put the home side back into the final.

The final takes place at St George’s on Tuesday 17th May.

League round completed, it’s the semi-finals tonight. In only their second season in the league Leicester topped Division A to earn a home match against six-time champions Surrey, while Division B winners St George’s are at home to defending champions Duffield in a repeat of last year’s final. 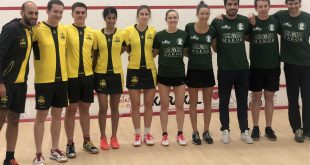 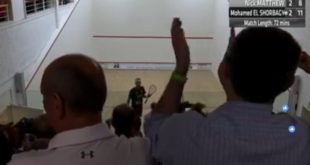