R3: Chichester lose out to Surrey at the death

The third round of the PSL 2015/16 season took place on Tuesday 10th November at Chichester Racquets & Fitness Club. Team Chichester, currently top of the League, played its second home fixture against Virgin Active Surrey. Team Chichester’s number one string, Adrian Waller, was not in the line-up [due to injury] and a tough encounter was in prospect.

First on the championship court, 16 year old Kyle Finch [WR234] played Surrey’s Lyell Fuller [WR136]. Finch recently retained his British Junior U17 National title and is in top form. Finch was first out of the blocks and quickly established an early lead in the first game which he did not relinquish to take it 11/4. Fuller was not to be outdone and steadfastly fought back to take the second 6/11.

Both players played a fast all-court game with tremendous coverage and retrievals. In the third it was nip and tuck and Fuller went 7/9 up. Finch, however, rallied well and reduced the number of errors to turn it around to win through 11/9 and establish a 2.1 lead. In the fourth Fuller took control of the game to win it 3/11 and force a decider.

Once again Fuller created a commanding lead before Finch began to claw his way back into the game. It was, however, too late as Fuller was resolved to win the match and eventually won it 6/11 to put Surrey 0.1 up on the night.

The next match followed on the glass with Matt Hopkin WR114 taking on Charles Sharpes WR53. Hopkin [AUS] was making his home debut for Team Chichester. Despite a slow start, Hopkin rallied well towards the end of the first game and with some fantastic boasts he snatched it 11/8. The next 2 games were extremely close with Sharpes’ outstanding retrieving and Hopkin’s exceptional boasts and reverse angle shots. It was, nonetheless, Hopkin who eventually took the spoils to finally win the match 13/11, 12/10.

Robbie Temple followed on with a tough encounter against WR36 Greg Marche. An entertaining match ensued with both players playing a fast game and covering all of the court. It was Marche, however, who proved too strong, and had the edge, on the night to win in 3 straight games, 7/11, 8/11, 5/11.

Lauren Briggs [Team Chichester] played on the adjacent court against Nada Elkalaawy WR139. Nada’s powerful game caught Lauren off-guard in the first and she won it 6/11. Lauren is a determined player and was never going to give up as she started to find her range and mix up the pace. Nada made a couple of errors which enabled Lauren to take control of the match and she won the next two games 11/4, 11/8. From then Lauren did not look back and she wrapped up a 3.1 victory. 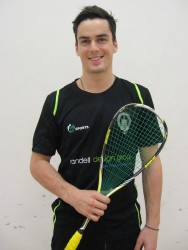 The crystal ball predicted a 1-4 win for Surrey but Team Chichester had other ideas and forced the tie to a decider.

The final match on the championship court was between the number one strings. Team Chichester’s Paul Coll NZ [WR39 and current Australian Open Champion] was making his debut for the team and his opponent was WR10 Karim Abdel Gawad [Egypt]. Gawad’s shots were winning the points but Coll kept the first 2 games alive with some unbelievable retrieving. Coll narrowly lost the first 14/16 and the second 7/11.

Coll’s persistence started to pay dividends in the third. He continued the incredible retrieving and the points started to mount up and he took the third 11/4. He single-mindedly pushed through the fourth with another win [11/7].

Incredibly there was a possible unforeseen upset on the cards and it was nip and tuck up to 6-all when Gawad grasped the next few points to forge a 6/11 win.

Previous 10-Nov, Round THREE
Next R3: Nottingham beaten at Coolhurst