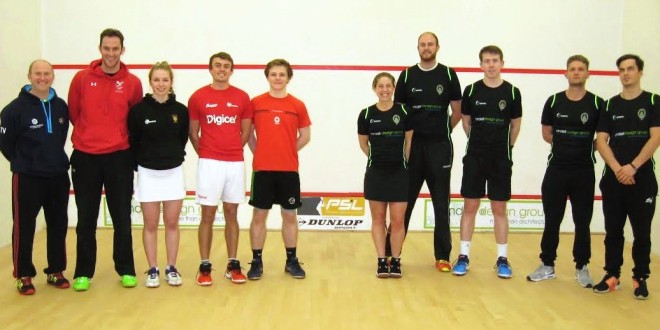 The seventh round and first home match, of the 2nd half of the PSL  season took place on Tuesday February 16th at Chichester Racquets & Fitness Club.

Team Chichester, currently 2nd in the League, played its fixture against Exeter Diamonds. The squad’s number one string, Adrian Waller, was not in the line-up; everyone moved up and Brandon Hanley made his second start of the season for the team. The city team is only 2 points off the lead and 10 points ahead of 3rd place; a place at the top beckoned.

Team Chichester had defeated Exeter 3-2 in the first half and was determined to be victorious in the home tie.

Chichester’s Lauren Briggs and Nathan Lake took to the courts first. Lake, playing James Peach, was solid from the outset and comfortably won the first game 11/3. Peach, 2015 British Junior U19 champion, was more involved in the second game by mixing up his game more. Lake, however, was a gear ahead of his opponent and closed it out 11/9. Lake was now in complete control of the match and moved Peach around the court. He coped with the slow pace and wrapped up the third game 11/5 for a well deserved 3.0 win.

Meanwhile Lauren never really found her rhythm against Amelia Henley [2015 Canadian Junior U19 Open champion and runner-up in the 2015 British Junior U19 Nationals]. Amelia’s length and powerful backhand kept Lauren at bay throughout the match. Lauren appeared to be struggling physically and Amelia closed out the match 7/11, 7/11, 2/11.

Next on the glass-back court Robbie Temple played David Evans, who has beaten him several times before. Temple played a steady rallying game to win a tight first game 11/9. A series of tins from Evans allowed Temple to double his lead, 11/6. It was nip and tuck in the third game and at 9-all Evans hit two tins again. Temple took a fantastic 3.0 victory to put Chichester 2.1.

It was Hanley’s unorthodox brand of squash against the more rallying and fitness based game of Franklin. They shared the first four games to take it to a nail biting decider. Franklin forged a 7/9 lead then at 7/10 Hanley saved three match points only to be denied the victory 10/12. 2-all and Exeter had forced the tie to a decider

Chichester’s Paul Coll NZ [WR39, winner of the 2015 London Open and current Australian Open Champion] played Tim Vail. The first game was very tight but Coll’s attacking game pulled him through to a 14/12 win. The second game followed a similar pattern; Coll attacked quickly but Vail hit his share of outright winners. Coll held on and eventually edged the game 12/10.

In the third Vail appeared to be tiring and Coll unfalteringly took point after point to quickly wrap up the match 11/3 to ensure a 3.2 victory for Team Chichester and top spot in Division B, seven points ahead of St George’s Hill.