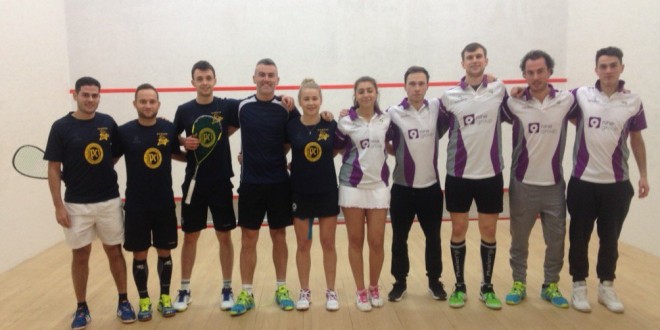 Surrey were back on their home turf for a clash against arch-rivals, St George’s. The Crystal Ball predicted a 5-0 win for Surrey but, which implied that it might be an easy run for Surrey but in actual fact, it turned out to be tough-fought 4-1 win for Surrey and there was blood on the walls to prove it…

First up was the clash against Surrey players, Lyell Fuller and Phil Nightingale. Fuller set the pace in the match from the off and Nightingale evidently struggled to keep pace with his younger opponent. This was borne out by the score line as Fuller quickly accumulated points going from 3-0 to 6-1 up in very little time.

Nightingale did his best to fight for position on the T and managed to peg a few points back to get him to 5-8. Fuller, however, was too strong and concluded the first game 11-5. The second game followed in similar form where it became apparent that Fuller’s pace was just too much for Nightingale who seemed increasingly pinned to the back corners. Fuller’s approach of going for quick-fire, short attacks seemed to pay dividends as he punished Nightingale severely for anything loose. It might have been the case that Nightingale was struggling with some type of back or hip-related injury that was impeding his performance, but regardless, it was Fuller who led the way and took the second game 11-3.

Fuller continued to stride forward in the third but perhaps lost some focus that let Nightingale back into the match so much so that he was able to get to 8-5.However, momentum shifts being what they are, it swung once again in Fuller’s favour after a tin from Nightingale that ultimately let Fuller back in to draw even at 8-8. Fuller capitalised on the momentum and at the business end of the game, closed things down 11-8.

“I thought I played well. I know Phil well because I train with him, so I knew what to do and stuck to my plan,” said Fuller.

Your strategy appeared to be to attack early and maintain a high pace, would you agree with that? “Yes definitely and I was feeling confident, which is part of how I play and I tried to control the pace.”

Asked whether being training partners with an opponent can make it difficult to play them, Fuller said “It can be both – it can be good and bad because sometimes you know what to do against them but of course they know you well too obviously. I quite like playing people I know but of course they might feel differently.”

“I’ve got quite a lot of tournaments coming up – I’ve got the Canary Wharf qualifying in two weeks’ time, I’ve got a £25k PSA event in Wimbledon that is run by Stacey Ross and the British Open after that… and all in England, which is very nice so there’s not much travelling!” 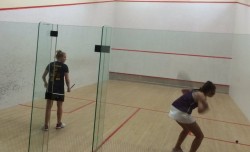 Stepping up on court next was 19-year-old Alison Thomson who was the recent runner-up at the British Nationals losing out to Georgina Kennedy in the final. Alison faced Rawan Elkalaawy who is in fact the younger sister of Nada Elkalaawy who often plays for Surrey and both regularly train over at Wimbledon Racquets & Fitness Club.

In the first game, Rawan was playing much more consistently than Alison. However, in the subsequent games, Alison increased the intensity level, played more kills and introduced more angles. On the final point of the match, Alison refused to accept the match on a stroke against Rawan and decided to play a Let. On the next point, Alison won the match with a low kill-shot. 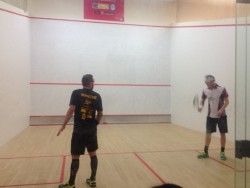 It seemed fairly clear from the very start of this match that Greg’s usually spritely movement was not what it usually is. This was then emphasised by how well his Dutch opponent, Dylan Bennett was playing. From the off, Bennett seemed very relaxed and confident and seemed to be in flow almost immediately. Bennett led the first half of the match with a 2-point cushion. Bennett seemed to sense that his younger opponent was perhaps struggling and stepped up the intensity of his attacks. Bennett ascended to a 10-7 lead but after tinning, Marche saw a glimmer of an opportunity to take the game and managed to take it to a tie-break at 10-10. It was Bennett though that took the first 12-10.

In the second, Bennett was looking cool and controlled and Marche was still looking out of sorts as Bennett sped to a 6-1 lead. After a stroke decision against him that led to a discussion with the referee, Bennett seemed to lose focus and let Marche back into it. This proved pivotal as Marche seemed to spring back to life, drawing level at 6-6. Marche was awarded another stroke at 8-6, which seemed to compound Bennett’s earlier frustration and ultimately paved the way for Marche to take the second game 11-6. 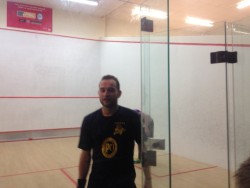 By the third game, Marche seemed buoyed by managing to peg one back and both players were neck-and-neck. More discussions followed with the referee with Bennett becoming increasingly frustrated. It seemed possible that Bennett’s concentration might foil him again but at 6-5 Marche made a characteristic dive that led to him cut his hand. At this point, Marche took a time-out for his blood injury for approximately 12 minutes leaving a smear of blood on the wall of the court. Tests were carried out on the blood sample and we can confirm that Greg definitely has squash in his blood. It can be difficult, psychologically after a long break during games – particularly if you have been in the winning position. In Greg’s case, it seems that the momentum remained with Bennett who went on to close it out 11-6.

The momentum remained with Bennett in the early part of the fourth game and Bennett seemed to return to the form shown in the first game as his attacks seemed to just roll off his racket with ease and confidence as he accumulated a 4-0 lead. However, Marche dug in and managed to pin together a string of points by digging in and just grinding it out to draw level at 7-7 and then 9-9. Greg’s run didn’t last unfortunately and Bennett brought the chapter to an end 11-9.

“I was pretty tired from the nationals this weekend. I didn’t play very well in the first two games but managed to take the third and felt a bit better, perhaps because I was struggling to wake up! Then, in the third, I dived and cut my finger so had to fix it and I couldn’t really hold my racket after this and was thinking a bit too much about it.

“I felt my calf again, which I have been struggling with for the last two months. I’m hoping that it’s going to be fine before Chicago next week and that’s life – I need to recover first.”

Greg will be taking on Max Lee from Hong Kong in the first round of the Windy City Open in Chicago next week.

Kent veteran and winner of the British Nationals Over 35s, Ben Ford was up next for Surrey as he took on Pablo Rawden, recent semi-finalist in the 2015 Boston Open. This proved to be a close match with Ford off to a good start in the first and second games before Rawden managed to pull one back in the third. It could easily have gone into a fifth but Ford managed to pip his opponent to the post to close it out 3-1. 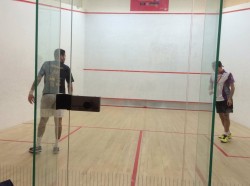 The highlight of the evening had to be the match-up between Surrey’s Karim Abdel Gawad [WR 9] who was fresh from winning the UCS Swedish Open in January.

He took on St George’s, Joe Lee [WR 55] who is one of the young English hopefuls flying the flag for English squash. This was always going to be an interesting match as Joe’s ranking belies his skill with a racket and often makes life difficult for his higher-ranked opponents. This was very much the case as Lee got off to a brilliant start leading 8-1 with some superb, solid squash. It was apparent that Gawad was looking very tired – no doubt a result of his gruelling schedule of tournaments at the moment. Gawad was also coughing a lot, which indicated that he was ill or simply run-down. Although he managed to recoup a couple more points, it was Lee that took the first.

Clearly frustrated by his performance in the first game, Gawad opted to remain on court practicing and to reflect on what was going wrong. This seemed to have some effect as Gawad kept level with his opponent and began firing in shots using angles from all over the court as is his normal way and slotted in a cheeky crosscourt nick at 4-2. With just one or two points between them it was clearly a neck and neck game but Lee managed to maintain the pressure and closed it out 11-8, which must have been frustrating for Gawad after such a big effort to get himself back into the match.

Gawad had clearly resolved to step things up further and opened up a 4-0 lead. Lee saw the resurgence coming and pulled back to level at 6-6. Gawad really stepped up the pressure but lee was looking in great form too and didn’t relent with the pressure. Gawad just seemed to edge it however with some great lengths and a dazzling array of shots from across the court, which played a part in taking the third 11-8.

Gawad seemed to be struggling once again in the fourth after tinning and then hitting a ball out of court. His coughing also seemed to ramp up and was clearly not feeling his best but seemed determined to push forward and seemed to hit a run of incredible widths in the mid-section of the game. The remainder of game followed the pattern as a close-fought game but Gawad managed to take it 11-7 to bring it to a fifth.

After some quick-fire exchanges at the front where Lee demonstrated his great reactions at 2-3, he managed to get to a 4-3 lead but Gawad held steadfast and pressed on to 7-5, 8-5 and dazzled with a a great fake at the front of the court at 8-6. Gawad kept pressing on at eventually closed it out 11-6 to take the match 3-2.

”I felt that I was playing with no pressure and after I was 0-2 down, I said [to myself] that I needed to focus as though it is the first game and push all I can and focus game-by-game. When it was 2-2, [I thought] now that it is equal, I had to give it all I could”. It’s always nice to win of course, especially when you are 0-2 down and it’s always good to win – especially in the league matches – when you’re in teams. It was a very tough match and I’m glad that I got the win after being 0-2 down.”

Asked about how he felt after winning his first major PSA tournament last month at the UCS Swedish Open, Karim said: “For me, I wasn’t expecting it and was working towards it and hoping for it but I wasn’t expecting to [win it] these days, so I was very, very happy of course and it’s a very big push for me for the next events because you know when you are almost there, so you work harder and it’s a good motivation for me to keep going and keep pushing for the next event.”

The next match is another crucial one, at home to new leaders Chichester on 15th March.