Last night saw one of the most highly anticipated PSL matches for years as newcomers Bexley took on multiple champions Virgin Active Surrey.

With the players on show and the fact that Bexley have been pretty much sold out every home game , this one was a sell out well in advance. The crowd took their seats early to ensure the best view of certain matches , the music was pumping and finally the introductions were made.

The first matches on court were always going to be tough for the home side, with English under 17 champion ,Elise Lazarus taking on world no.10 Alison waters and on the adjacent court home grown player Brad Masters was taking on world no62 Ben Coleman .

From the start Waters played high pace game and forced Lazarus into too many short balls and mistakes. Waters took a comfortable 2-0 lead in games and at 9-3 up in the 3rd it looked all over but suddenly Elise started to be more patient and now the mistakes were coming from Waters, as well as some sublime winners from Elise, who found herself 10-9 up! Unfortunately a stroke, a mistake and a winner from Alison later and it’s 12-10 and the match to Waters, 1-0 Surrey.

Next door the same story for the home team. Some great pressure from masters and the occasional winner mixed with some great movement from Coleman and nice holds. Coleman was generally in control and despite Masters holding a 6-4 lead in the 3rd , he was unable to hang on and it was another 3-0 win and 2-0 in the match for the reigning champions.

Next on court 1 was two- time world junior champion Diego Elias against American Todd Harrity. This was an absolute humdinger!

From the start both players were hunting the volley and taking it in short with some amazing winners and ridiculous movements! The crowd were absolutely loving it and getting behind Todd who hadn’t lost yet this season, and was on fire. The match was played in an amazingly sporting manner and both players were a credit to the sport, their respective clubs and themselves. There was nothing to separate the two but Todd eventually managed to take the 5th and final game on a tie break! The crowd went absolutely wild and gave both players a huge ovation for the best match at Bexley this season!

Next door was the much anticipated return of the black falcon, Mazen Hesham, against world no. 8 Ali farag. Mazen with his usual style of holds, flicks and attacks were soaked up by the silky movement of Farag which forced a fair few mistakes from Hesham, 11-3 Farag. The next game, roles reversed with Farag making mistakes and 11-6 to Hesham. Farag upped the pace and Mazen, probably not quite back to match sharpness with his movement to the front, and it’s 11-3 again to Farag. The 4th was competitive but Farag always had the upper hand winning 11-6 and the match 3-1.

Great to see Mazen back on court and we look forward to seeing him back to his best for Bexley next season!

Finally the one everyone was waiting for ! World champion Karim Abdel Gawad against Bexley’s world no.12 Ryan Cuskelly. Cuskelly was up for it and was mixing the pace and pinning back Gawad but it seemed every time he went short Gawad picked him off with sublime touch on both sides with hold drops and trickle boasts. The touch was unreal!

The match followed the same pattern though out with Ryan trying different tactics but with the same outcome. It was an absolute treat for the spectators . Gawad came out on top at the business end of each game winning a very tight and entertaining 3-0, Surrey taking the match 4-1.

This was our last home game of the season and we would like to thank all volunteers that made it all run smoothly, the sponsors for making it possible, the refs, the players have been amazing, giving 100% each match, donating prizes for the raffle each home game and getting on court with our juniors each time.

Most of all thanks to all the spectators who have made each home game a great atmosphere for the players to play in. Playing on Fridays (one Saturday) has proved a great success. We look forward to next season but first one more push, away to St George’s hill on 28th ! 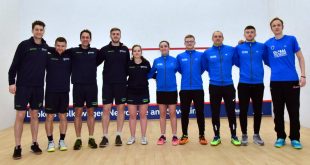