Team Chichester played the second home match, 5th round, and last match this half of the PSL season, against a formidable St. George’s Hill squad.   The team from Weybridge arrived with Mohamed Elshorbagy, World Ranked No.2 (Dec’17) at the top of the order.   There was a sell-out crowd at Chichester and everyone anticipated a feast of top quality squash; they were not disappointed. 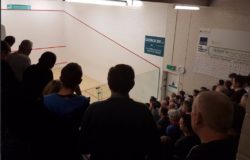 Jasmine Hutton was first on court and played WR9, Joelle King [NZ].  Jasmine equipped herself well and steadfastly battled hard throughout the match.  Despite this, however, Jasmine was always doing the chasing.   Her 7/11, 4/11, 5/11 effort was a very brave one in defeat as St. George’s went one-up.

Chichester’s Ollie Pett started as favourite against Charlie Lee [WR119].   The first, very tight, game went to Lee, 9/11.   Lee made fewer errors as Pett seemed to be a bit impatient to go in short.   Lee continued in the same vein to take the second 3/11.   Lee’s confidence was now flying and in the third game he surged ahead to reach match ball.   Pett unwaveringly clawed his way back by winning the next 6 points on the trot.   But Pett left his resurgence a little too late and Lee was in no mood to let the match slip through his fingers.   Lee finally won the match 9/11. 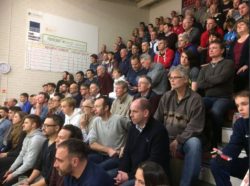 Miles Jenkins [WR171] was next on court to play St George’s Lance Beddoes, WR121.   Jenkins attacked the ball well in the first and always had the upper-hand, keeping it straight and tight to win it 11/9.   In the second it was more of the same, but a slight drop in concentration midway allowed Beddoes to use the angles well to snatch the second 6/11.   In the third, Jenkins stormed to a 7/3 lead with more fantastic straight squash and attacking the volley drop.   Beddoes countered this by mixing the pace well and then taking advantage of Jenkins’ slightly loose shots to win it 10/12.   Henceforth Jenkins was unable to re-establish his rhythm and Beddoes ran though 7/11 to give St George’s an irrefutable 0.3 match victory.

Meanwhile, on the championship glass-back court, Chichester’s new signing, Omar Abdel Meguid [WR34] was having a hard-hitting encounter with Tom Richards [WR38].   The first 4 games were shared; Meguid took the first 11/8.   Richards re-grouped and kept his rhythm well to take the next 2 games 9/11, 6/11.   Mehuid’s incredible retrieving [plus one of his outrageous nicks] allowed him to even the score 11/9.   The enthralled spectators anticipated a spectacular 5th game decider. 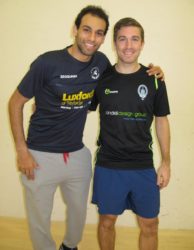 The 5th game did not disappoint; it was nip and tuck all the way to 6-all.   Meguid built a 9/6 lead, then 10/6 match point.   Richards was defiant and he was not going to bow down and he scraped his way back with some outrageous drops from the back to eventually snatch the match 11/13.

The final match between the number one strings Chichester’s Mathieu Castagnet [WR27] and Mohamed El Shorbagy [WR2].   This was the match everyone wanted to see.   Castagnet started the stronger player and with some unbelievable retrieving and volley drops he won the first 11/7. 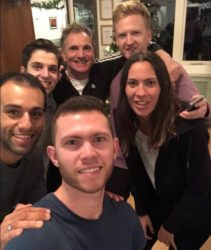 In the second Elshorbagy upped the tempo and he won it 7/11 by hitting hard and low as well as pinpointing the back 2 corners with incredible accuracy.  In the third, both players used all parts of the court by playing lobs and drops to great effect.  Elshorbagy held his nerve to take it 7/11 to go 1.2 up.

Castagnet still pushed hard to stay in the match and, aided by a few Elshorbagy tins, he made it to 10-all.  Again, Elshorbagy remained totally focused and closed the game and match out 12/14.

It was an unbelievable night’s squash and the Team Chichester players gave it their all, down to the last points of every match.