The Premier Squash League was in town again, Crackley Lane, Kenilworth to be exact, and the newly formed outfit The University of Warwick/Kenilworth Squash, who are quickly becoming known as the WarKens, had their fourth consecutive 3-2 result, and the 2nd in their favour after losing the first two.

Bristol were the visitors on Tuesday and as it turned out, also the victims in a tumultuous battle.

With The University of Warwick/Kenilworth winning with some comfort at 4 through Mark Fuller, and at 3, with the classy World Junior number 1 Victor Crouin of France. The critical match this week fell to the Women with Sarah-Jane Perry, the WarKen talisman unbeaten for them in three previous matches.

This also represented by far the hardest test for SJ, with friend and rival Tesni Evans (Welsh number 1, World ranked 14) her temporary foe. Things were going according to plan with SJ 2-1 up in games, although there was a rather bizarre triangle between both players and the referees, which at times was light hearted and at others very antagonistic.

Perry received a conduct warning for persistent comment, and in the 5th and final set the referee had to banish the players from speaking out in between rallies. Not that this worked too well. 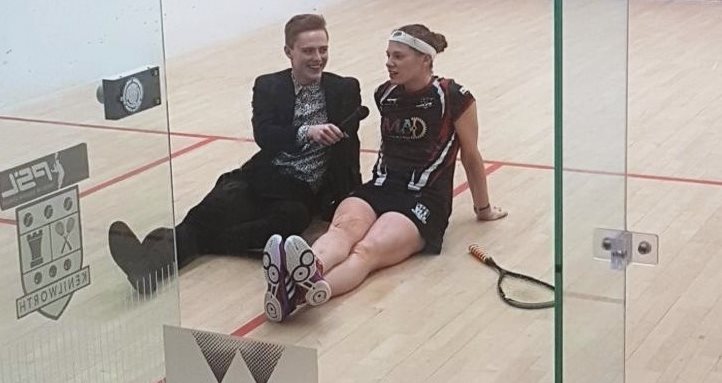 To cut to the chase, match ball down, her unbeaten record about to be blown to pieces, Perry does what Perry does very well when it really matters. She played a good, solid rally with a backhand volley to win it, followed by a guttural scream. This seemed to take the wind out of Evans’ sails, as Perry then closed out what turned out to be the crucial rubber, and with it we now hold 3rd position in the league at the half way stage.

Ashley Davies’ match versus Bristol’s Josh Masters was the 2 string, which matched the Women’s match for intensity but also went the distance with Davies just losing out 3-2, and Iker Pajares from Warwick/Kenilworth and Youssef Soliman from Bristol showed why they’re two of the World’s emerging stars with a display of breath taking skill, speed and agility. Soliman triumphing 3-1.

“To finish the first half with 2 wins, 2 losses, after losing our first 2 matches, is very satisfying. We’ve got a team of warriors, who are coming up with the goods when it really matters and I couldn’t ask for anything more from any one of them. We’re in a good position now to attack the play-off positions (first and second – Warwick/Kenilworth lie 3rd) in only our first season. Bring it on!” said a clearly delighted team manager/coach Steve Townsend.

Revenge will be high on the agenda when the season resumes on the 30th January in the local derby against Birmingham University, at home on Crackley Lane. The first match ended 3-2 to Birmingham.