Reflections on the Semis

Reflections on the Season and the Semis

ST GEORGE’s : “We’re due another win”

The season has had its ups and downs including several worrying moments , some electrifying individual performances and some vital support both from the fans and all of our fantastic squad of players , who have coached each other, built up a team spirit and made my job as manager so much easier.

We are privileged to have the World Champion spearheading our assault on the PSL title . Mohamed has lead from the top and he has been a great cornerman, sometimes at the expense of his own preparation for matches , passing on tips and squeezing the best out of his teammates .

Robbie Temple and Dominique Lloyd -Walter filled in with style and the Spanish Inquisition Borja Golan and Carlos Cornes were solid and determined throughout the campaign .

The semi final at Nottingham had everything that any squash fan could wish for culminating in two world champions fighting it out to the death with Nick Matthew almost snatching victory from us by outplaying Mohamed for the first part of a remarkable match and then  continuing to match him until the end . 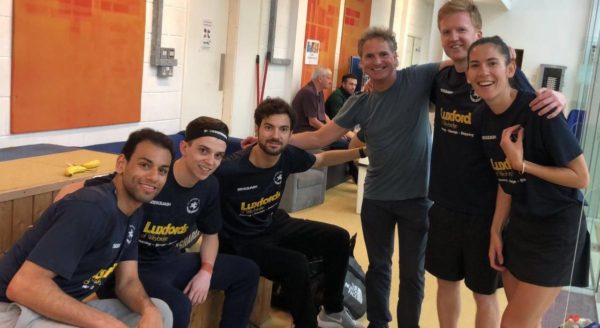 The final with the RAC promises so much too . Once again it will be a very close battle .

I won the PSL (National League) as captain of Cannons in 1986 and with a couple of final losses and some semi final appearances  with Luxfords St George’s Hill I think that I’m due another win . We have the team to deliver but it will be all on the day .

What a match our semi-final against Pontefract was – electric atmosphere all night with squash to match, two teams that just didn’t know how to surrender.

When Pete and myself  put the team together we were looking for fighters and players could dig deep and they showed on the night exactly  what it meant to the team.

It’s fantastic to reach the final in our first season and we look forward to a good night at St George’s.

Returning to the RAC evoked a flood of memories,going back to the time of the Drysdale [British Under 19 Junior Open], Gawain Briars, Christy Willstrop {runner up]. Those were the days when women were excluded, thankfully long gone, and of white kit, which incredibly is still in place.

Memories, too, of the World Awards, the last time, sadly, I saw the charismatic and delightful John Easter.  Wonder of wonders,the RAC  happily in PSL facing Pontefract, classless, raceless, any coloured kit, where women rule the roost.  in the semi final.

The match promised a great deal and more than lived up to its promise . It is hard to imagine that the raucous,biased crowd were members , so I asked Greg {Pearman} if he had hired a band of Millwall supporters,which he vehemently denied saying they were from Chelsea!

On paper the match looked likely to have a 3-2 outcome and that’s how it turned out . Two of England’s best women players, Laura Massaro and Alison Waters showed why the are still major forces, Massaro giving Pontefract a 1-0 lead, 3-1 . Meanwhile Patrick Rooney was leading let conscious Ben Coleman 2-1 and 4-0. Coleman though persisted on a court well suited to his athleticism winning 3-2 to level the match.

James Willstrop, struggling after his Commonwealth Games exertions, was unlikely to trouble Paul Coll and he quickly succumbed, so 2-1 to the RAC. But Chris Simpson , not involved in the Gold Coast, ran out a convincing  3-1 winner  over Alan Clyne tor take the match to a decider between Daryl Selby and Saurav Ghosal, both silver medallists in Australia.

Selby had also played the European Team Championships in Wroclaw Poland,unbeaten,enhancing his considerable reputatuoin as a team player.India’s best ever player and Leeds University graduate Ghosal, led 2-1 with every chance of success, but from 5 all Selby asserted, levelling the match and then going clear in the fifth to take the RAC to the final against St,George’s.

Post match I found myself in the company of Stuart Courtney,  Chris Orris, Saurav Ghosal and James Willstrop, four Drysdale cup winners, bringing together different worlds and different ages. It was a more substantial Stuart than  the one who graced the courts and it was good for my self esteem to stand next to him!   It had been a great night for the sport, PSL, for Pontefract supporters, so thanks to Greg and his team for their splendid hospitality. 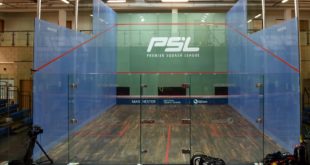 The Premier Squash League is excited to announce the inclusion of two new teams into the 2017/18 season ...