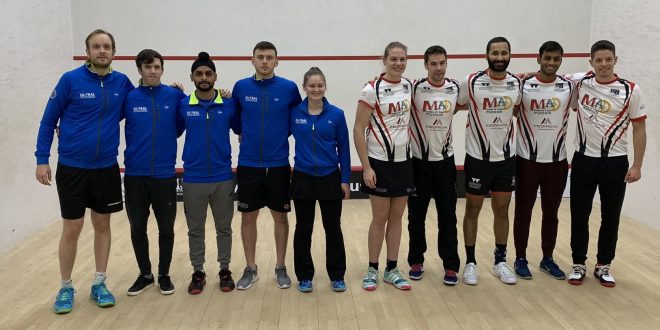 What immediately stood out on arrival at the welcoming Kenilworth club was the camaraderie of the players, which happily carried over onto the courts so that John Masarella and his team had little to do but call the score.

SJ Perry, home after her splendid performance in Hong Kong, staved of a spirited challenge from Hollie Naughton, who remarkably was to score Pontefract’s only point of the night.

Daniel Mekbib, clearly enjoying himself and playing with a smile, severity and no little skill, won the first game off Harinder Pal Sandhu comfortably and then, as Sandhu improved, held him off 11-9 to give his team a 2-0 lead.

Mahesh Mangaonkar, the second Indian on show and Chris Simpson went toe to toe and Simpson put  his opponent through plenty of work, looking likely to level the score. But as Mangaonkar came under physical pressure he cleverly took the ball in short more often and skilfully took what could have been a  crucial second game.

With Patrick Rooney, perhaps not enjoying the higher tin on the second court, losing 11-9, 11-9 to Mark Fuller, it was left to James Willstrop to  salvage whatever he could.

In a thoroughly entertaining match he lost the first game 13-11 and feeling the physical pinch against his athletic opponent, Raphael Kandra, was probably happy not to have to play a third.

It was a comprehensive win for the home team, who all responded in style to the usual PSL full house. Despite the loss and the prospect of the two and a half hour journey home  another successful night for the PSL. 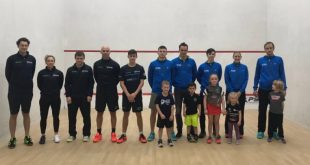