R2: Another close call but Duffield on top again

Somehow, Benz-Bavarian Duffield keep finding ways to win Premier Squash League matches but their victory away to Coolhurst London was their narrowest escape so far.

After taking an early grip on the contest with wins in the first two rubbers, it all came down to Declan James scrapping to hold off James Earles in the fifth game of the decisive match.

At 9-8 to the London player and at the end of another long rally, James was awarded a stroke when a let might just as easily have been the call and that proved to be a crucial moment as the Duffield player ground out the next two points to make it two wins out of two for the defending champions.

“It was neck and neck all the way,” said team manager Felix Frixou. “Dec said he was never going to lose but it was close. James Earles played the game of his life.”

Millie Tomlinson was, by that time, 1-1 with Madeline Perry and was on her way to one of the most momentous victories of her career.

The former world number three used her experience to try to knock Tomlinson out of her stride but the 23-year-old stood up to the physical test and took it to the fifth.

Three straight points from Perry pulled it back to 9-9 in the decider but Tomlinson held her nerve for what proved to be a crucial win.

“When it could have gone either way, Millie showed her strength of mind to get her through,” added Frixou.

“Every time I see her play, she impresses me more and more and shows me what a good number two we have when Laura Massaro is not able to play.”

His previous PSL appearance was also a win against Sutcliffe – for Chapel Allerton – and it was a promising start from Tomlinson, who showed he may be a useful addition to the squad.

The match was back in the balance when Coolhurst took the next two rubbers.

Hinds played even though he had not fully recovered from an ankle injury – Frixou admitted he would not have played had other players been available – and was below his best as he lost 11-9, 6-11, 11-5, 11-3 to the lower-ranked Nick Mulvey.

Chris Simpson came to the match fresh from the biggest success of his career, in the St George’s Open, but he could not raise his game again enough to beat Cameron Pilley.

The Australian, on his 33rd birthday, was in vintage form but James was able to deny London the chance to complete their comeback.

Duffield are set to have Nick Matthew and Laura Massaro back in the side for their next PSL outing, away to University of Birmingham Lions on November 10.

Original stort on the Derby Telegraph

Previous 27-Oct, Round TWO
Next 10-Nov, Round THREE 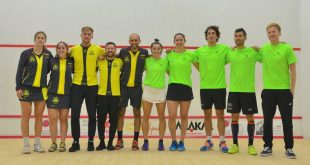