Behind the Scenes at Coolhurst

Alison Henley at Coolhurst for their first-ever PSL home match …

A little peep behind the scenes on the afternoon of the first home match for Coolhurst in The Premier Squash League, supported by Dunlop. 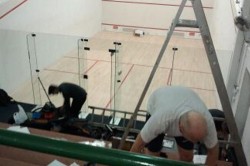 15.00   I arrived in Highgate and walked from the underground station to the club on a blustery autumnal afternoon.  The club house seemed quiet, showing no clue to the hive of activity by the show courts.  A trail of cables and electronic equipment led the way to the courts where club members had been busily rigging up no less than 4 cameras, 2 microphones, live score board display since 7.30 that morning, not to mention 2 large screens in the bar where the march would be shown, with full audio.

Team manager Nick Sutcliffe works full time as a management consultant in the City of London, which is a stone’s throw away from the club.  In recent weeks his colleagues have been party to his many phone calls from signing up players, organising their travel, co-ordinating media coverage, designing tee shirts; to ordering in extra barrels of beer for the big night! 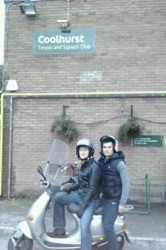 16.15   As the afternoon wore on Nick flew around, seemingly in more places at the same time than was humanly possible.  Donning his crash helmet, he set off to pick up 1st string Ong Beng Hee from the underground station on his Vespa.

With Ong Beng Hee safely delivered to the club, Nick used some of his management consultancy skills to make power point slides for the match results display screen.

I bumped into the club’s coach and Middlesex county player Jago Nardelli, who was eagerly anticipating the matches ahead, predicting a tight score-line, in what he hoped would be an intimidating atmosphere generated by a sell-out crowd in the tight viewing area behind the main court. 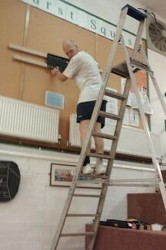 17.00   A walk round to the show court saw a club member up a ladder hanging black drapes and fixing brackets to the wall.  The squash chairman, Peter Hilton, surrounded by cables and electrical equipment, was reading highly technical instructions to do with the installation of the TV/sound and audio systems. 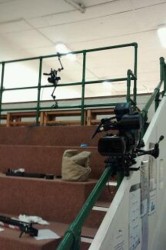 17.15   The cameras, were being positioned, one on the tin, one at the back and one on the side of the viewing area.  A cameraman was testing angles on the hand held camera, and another club member was doing sound checks.

17.30   A local shopkeeper turned to set up pancake making facilities in the bar, plastic beer glasses were made ready for spectators to use courtside, and the match night meal was being prepared in the kitchen

18.00   Spectators started to arrive and their tickets were allocated against spread-sheet on a very well organised ticket desk.

18.30   The court viewing area was miraculously clear of the tool boxes, adders and cabling and a club member was vacuuming the whole area, whilst some of the players took to the courts for a warm up hit.

19.00   The remainder of the players arrived, including Joel Hinds and Declan James in the Duffield minibus.

19.15 The show court area filled up with excited Coolhurst fans, a final sound check was made – and then to the tune of “Eye of the Tiger, the teams were introduced on court.

Coolhurst were on their way! 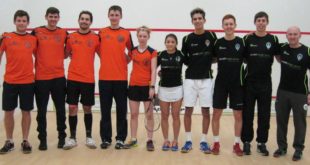 Coolhurst get their revenge at Chichester

Team Chichester’s first match of the second half of the PSL season was played against a Coolhurst squad intent on payback ...