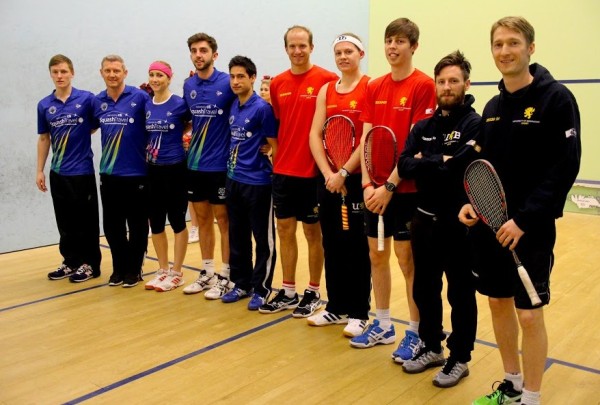 Following the bitter disappointment of losing a tense match away in Nottingham three weeks ago, the Birmingham Lions looked to regain their pride at home to Pontefract. With the news that squash superstar Steve Coppinger would be making his debut for the home team, a sense of serious expectation was felt among the crowd for some superb squash and another Birmingham home win. Needless to say, these hopes were more than fulfilled.

Our evening began with an excellent show from the Birmingham Pussycats. The usual niceties ensued, before the first players took to court in this eagerly anticipated evening of  PSL action. Once again the atmosphere was marvellous as the crowd sought to motivate and inspire the Birmingham cohort. 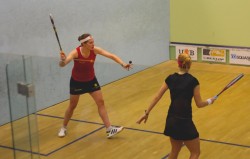 In the ladies’ string, world number 17 Sarah Jane Perry faced serious competition in the form of Sarah Kippax, a fellow top 20 player. The first game featured some breathtaking rallies, as both players aimed to continue their recent fine form. Kippax edged it 11-8. The intensity showed no signs of dropping in the second, which was narrowly taken by Perry. In the third, Kippax began to find herself on the back foot as Perry stamped her authority on the match. The Birmingham player eased to an 11-2 win.

However, an unprecedented comeback from Kippax ensured that the spectators would be treated to an exciting fifth game. After some final words of advice, it was Perry who appeared the stronger of the two. Despite some final resistance from Kippax, it was the consistent length of Perry which stole the show and ultimately ensured a 3-2 win for the Birmingham Lion. 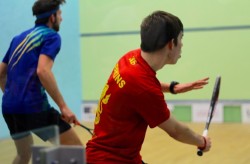 University of Birmingham student Miles Jenkins took on Alex Hodgetts in the fourth string match. Both players started the first game slowly, conceding lets and making errors. Hodgetts saved one match point with a perfect forehand kill, however a beautiful crosscourt length from Jenkins secured a 1-0 lead. Both players produced impressive drop shots in the second, but Jenkins length was far more consistent. With game balls to spare, Miles extended his lead.

The third game was dominated by long, hard-fought points. Hodgetts appeared determined to not let the match run away from him, and a lucky bounce provided him with the opportunity to take the match into a fourth game. However, Jenkins responded fearlessly and took the match at the first time of asking. 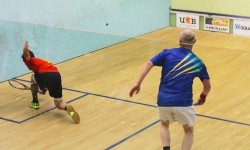 The third string clash certainly had the potential to provide an interesting match. World number 80 Peter Creed, known for his insane speed and athleticism, took on the experienced 42 year old Simon Parke. The first two games produced some fascinating squash. Parke’s consistent length and deception had Creed doing court sprints. However, Creed used his pace to full effect, latching onto every loose shot and sending his opponent the wrong way with some technical brilliant skill of his own.

Despite the efforts of the elder player, Creed raced into a 2-0 lead. In the third Parke unleashed a series of fantastic drop shots and attacking boasts to keep the competition alive. Creed stayed with him every step of the way, and at 9-9 put on one final fantastic display of speed as he secured the win. In spite of the 3-0 score line, it was an outstanding match that had the crowd in absolute awe. 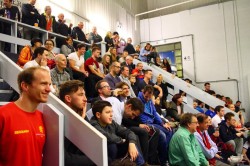 Former world number 33 Chris Ryder, who missed the first Lions’ home match through injury, took on a player over ten years his younger in the form of Ben Grindrod. Experience played its part, as Ryder from the off controlled the pace of the rallies. In truth, you could see there was a clear gap in standard on the night. Ryder’s quality of drive was too much for Grindrod to handle, and his outrageous winning drops and kills allowed him to steamroll his way through the first game.

After a short break Ryder showed no signs of slowing down. The match almost began to take on exhibition form, as both men proceeded to amaze the crowd with the quality of their winners at the front. Grindrod remained on the defensive throughout the encounter, and could not provide an answer to the consistent Ryder length. There was no shortage of quality, but this one finished fast. 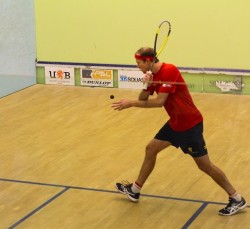 With the win already sealed up, the fantastic Birmingham supporters were able to relax as one of the world’s best took to court. Steve Coppinger , fresh off the back of his quarter final match against Mo El Shorbaggy, took on Ageel Rehman world number 85 in the first string match. Coppinger made his presence known instantly, pulling off the same magnificent straight lengths and drops that he has become known for. Rehman seemed determined to not be a walkover, but simply could not push his big South African opponent away from the middle of the court.

Coppinger’s touch got the crowd rocking, as he showed off his full range around the front. Rehman and company celebrated every Pontefract point as if it were a match winner. The rallies provided an excellent lesson in both court control from Coppinger and defensive movement from Rehman. It was an excellent spectacle that reflected the entire night of squash, both in class and in victory for the Birmingham Lions.

A fantastic evening of squash hosted by University of Birmingham Sport (UBSport) concluded in a resounding Birmingham Lions’ clean sweep. the Pontefract players did their reputations no harm, but there was a clear difference in standard on the night. The supporters left thrilled by what they had seen, whilst also anxious to get their tickets for the next home outing. Birmingham Lions will take on Coolhurst London, January 13th.

Previous R4: Nottingham scrape home at Leicester
Next R4: Surrey get back to business 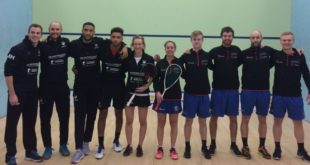