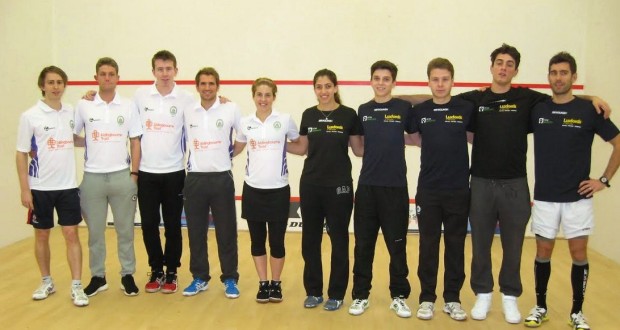 Team Chichester, currently top of the table, played St George’s Hill in the second home fixture of the season. It was, as expected, a very tough encounter.

First on court, Team Chichester’s Lauren Briggs played WSA ranked 41 and current British Junior Open U19 champion, Yathreb Adel [Egypt]. The St George’s player was very quick out of the blocks – hitting cleanly and moving freely at an exceedingly high tempo. Lauren struggled slightly with the pace and lost the first game 6/11. Undeterred she edged the next 11/9, in a very tight second game. Yathreb countered by upping the tempo again in the next 2 games and won the match 7/11, 7/11.

On the championship glass-back court Team Chichester’s No.1 string, Rex Hedrick [AUS] faced WR7 Borja Golan [Spain]. The match was long and all the rallies were well contested. Golan incessantly switched the pace and made good use of the lob and narrowly won the first 9/11. Hedrick battled his way through everything and with sheer hard graft managed to take the second game 11/6. Golan’s consistency and ability to vary the pace proved too difficult in the end and, despite every effort made by Hedrick, Golan took the next two games 7/11, 7/11.

Following on from Lauren’s match, and making his debut for Chichester, Tristan Eysele played Charlie Lee who was also playing his first match for St. George’s Hill. Fast attacking but one pace squash ensued, with no real change in tactics from either player. Throughout the match they traded games with each other with Eysele always a game up and Lee playing catch-up. Eysele forged a good lead in the 5th decider and held on to win it 11/4 which narrowed the deficit and kept Team Chichester in the hunt.

Nathan Lake [WR116], making his home debut for Team Chichester, played Charles Sharpes [WR73]. Sharpes forced the pace throughout, although Lake did tenaciously fight for each point with some good touches in part. Sharpes power hitting was more consistent and his length better. Although all the games were close it was Sharpes who held his nerve well at the end of each game to run out a 0.3 winner [9/11, 8/11, 8/11] and put St.George’s Hill 1.3 up and victory to them!

Next on court, Chichester’s Robbie Temple was hoping to narrow the gap, gain a few more points and salvage some pride as he took on WR33 Joe Lee. The packed gallery was treated to a thrilling match. Temple played with pace, touch and deception against Lees’ speed and power and won the first 11/7. The next game was packed with unbelievable squash as both players put everything into it but Lee eventually snatched it 12/14. In the third, Lee gained momentum and Temple began to look tired at this stage. Lee won it 4/11. In the fourth Temple took an early lead and was determined not to relinquish it; an 11/4 win ensured the match went to a decider.

Early in the 5th they were equal but then Temple hit four outrageous winners to give him breathing space. He proceeded to convert this advantage to win the match 11/6 to give Chichester a respectable 2.3 result on the night.

Team Chichester’s next match is at home to Surrey on Tuesday 9 December.