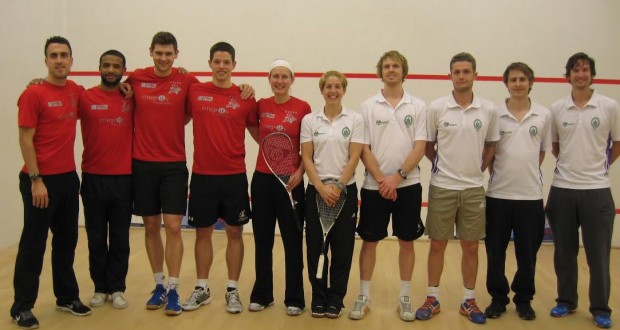 Team Chichester played its first home match of the second half of the season against PSL Group B League leaders, and 5 times defending champions, Surrey H&R. The match would undoubtedly be a tough task for the Chichester squad but, time and time again, the squad has proven that they can pull off shock results and nothing in the PSL is ever certain.

Lauren Briggs [Chichester] was matched against Alison Waters [WR4], who recently retained her National Championship title. In the first and third games Waters established good leads with steady pressure hitting. In the second, however, Briggs reached 9/7 before Waters clawed back the deficit to win it 9/11. Waters continued to play good consistent squash and comfortably took the match 4/11, 9/11, 3/11.

Meanwhile, on the glass-back championship court, Robbie Temple played Surrey’s Adrian Waller [WR29]. Temple started the match playing steady, patient squash and built up a 6/1 lead. He then lost concentration, and the game, 6/11. The second followed quickly with a 2/11 win for Waller. Composure was restored and Temple took the third 11/4. At this point both players were producing superb squash with Temple regularly switching hands and reaching game ball in the 4th before Waller finally clinched the game and match 12/14 (in 59 mins.) to put Surrey 0.2 up.

Anthony Graham, who had been recalled to play for Chichester, in Olly Pett’s absence, did not disappoint in his contest with Raphael Kandra. In a match comprising 4 games and lasting 58 minutes, the first 2 games were shared; both players playing an attritional retrieving game. The third game was critical and Graham finally won it on a tie-break with each player reaching game ball on several occasions. In the fourth game Graham lifted his game and established a strong lead. He never looked back and wrapped up the match 11/7 to keep Chichester in the chase.

Rex Hedrick [WR60] followed on to play Surrey’s Adrian Grant [WR20]. Grant controlled matters throughout the first two games (the first won on a tie-break) and looked very comfortable. The third game continued in the same vein; Hedrick was always chasing the game but Grant’s class was evident to all and he won through to win (in 51mins) 0.3 to give Surrey an unassailable 1.3 victory.

In the dead rubber match the number one strings, Jonathan Kemp [Chichester] played WR7 Peter Barker who was returning from injury. The match evolved into a very entertaining encounter which is usually the case when Kemp plays. Barker just kept the upper hand, after winning the first game tie-break, and he sustained this to win the next two games 5/11, 8/11. The packed gallery was treated to some excellent all court squash from both players but the result in the end was an overall 1.4 victory for Surrey.

The next fixture for Team Chichester is away to Bristol on March 11 and the squad’s winning ways need to return. The final home fixture is against St. George’s Hill when the result will give a clearer overall picture regarding the play-offs.