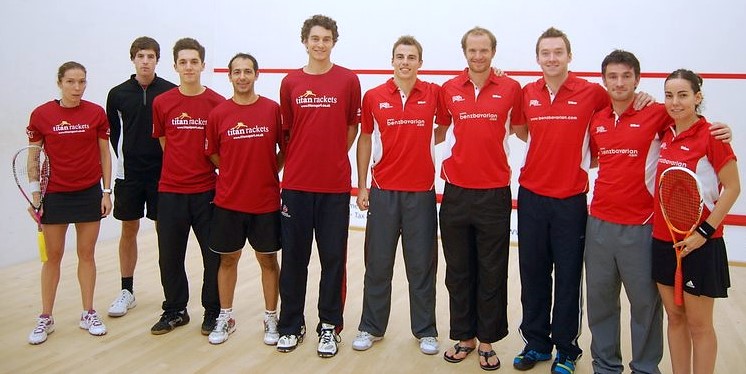 Here we are at Duffield Squash Club for the opening round of the 2011/2012 PSL season, where Benz Bavarian Duffield are playing host to Oxford Health and Racquets, and it promises to be a great entertaining match all the way through, despite a couple of late team changes on both sides in the middle playing order.

The first match up on the main court was the women’s match featuring the World #2 Jenny Duncalf representing Duffield and the World #4 Madeline Perry representing Oxford and this promised a great match, which of course was what we got.

Both players started a little cautiously and the score moved up evenly to 5/5 but then Jenny got the feel of the court first and took a 10/5 lead, finishing the game off 11/6. Despite Jenny taking the first two points of the second game, Madeline grasped hold of the game, taking a 7/2 lead, then 9/3 and 10/4 before taking the game 11/5. The third game followed a similar vein with Jenny showing a slight lack of concentration and Madeline took the game 11/6. Madeline then started the fourth as though she wanted a quick finish, taking a 5/0 lead, but Jenny was not going to give in easily and stormed back to lead 6/5. With both players playing some exquisite squash, with great rallies and wonderful retrievals, the score moved up evenly up to 10/10, tie break. They then pushed it to 12/12, Madeline took a point then Jenny unfortunately put one into the tin to give Madeline the game 14/12 and the match 3 games to 1.

On the adjacent court Laurence Delasaux, making a return to the Duffield fold, was facing late replacement Andrew Birks for Oxford. Laurence had the upper hand all the way through the first two games, winning them 11/3 and 11/6, and indeed had match ball at 10/7 in the third. However young Andrew fought back bravely to level at 10/10 and defiantly took the game 15/13after an epic battle. Andrew then took the lead up to 10/7, game ball in the fourth but unfortunately Laurence proved too strong in the end and took the game 13/11 and the match 3 games to 1.

Veteran Duffield player Andy Whipp was next on the adjacent court facing youngster Ben Coleman, who less than two years ago was winning the British Junior title. Andy did not give the youngster much of a chance and went on to win 3 games to nil.

Next up on the main court for Duffield was South African Steve Coppinger who faced Oxford’s veteran Scott Handley, but this time the veteran just could not stay in the game with Steve, who went on to win 3 – 0, making the match safe for Duffield. 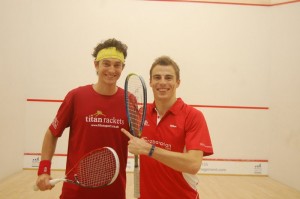 Finally with the match result in the bag for Duffield, on came their favourite player, World #1 Nick Matthew, who was facing the new ‘hardest hitter’ in squash, Australian Cameron Pilley. This turned into a ferocious battle with both players trying to hit the ball through the front wall and was exceedingly close scoring throughout the first two games with Nick just easing in front at the end to take them 12/10 and 16/14. However in the third Cameron was obviously tiring and Nick played out to take the game 11/6 and the match 3 – 0.

So the first match of the season at Duffield yielded a very good opening score of 18 points, so beware the other teams in their group.

Previous Round 1: Surrey Finalists Set Off To Strong Start
Next Round 2: Night of the Tweeter as Surrey Scrape win 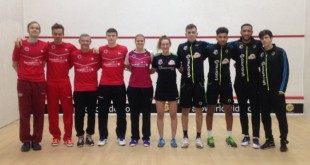