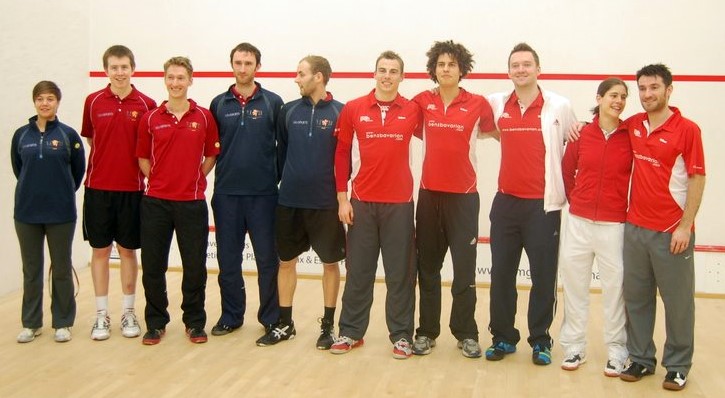 Home love all round on Valentines Night

In complete contrast to the clean sweep of away wins in the previous round, Valentine’s Night in the PSL saw all five home teams win as Duffield and Surrey H&R maintained their grips at the top of their respective divisions.

Duffield, runaway leaders in Group A, went 3-0 up against Birmingham University thanks to wins from Laurence Delasaux, Andy Whipp and Joel Hinds with newly-recrowned national champion Nick Matthew still in reserve. A comeback from 2-0 down by Deon Saffery pulled one back for Birmingham, but Matthew despatched Chris Ryder 3/0 to give Duffield 19 points and a home semi-final – barring mathematical miracles in the remaining matches.

Oxford, starting the night in third place but just one point behind Nottingham, travelled to bottom of the table Pontefract. The visitors went ahead with a win for Madeline Perry over Vanessa Atkinson, but Pontefract’s other retired stars Lee Beachill and Simon Parke put the home side ahead and in sight of a first win of the season. Siddarth Suchde duly delivered to put Pontefract 3-1 ahead, while Cameron Pilley beat nationals finalist James Willstrop for a few consolation points for Oxford.

With three rounds to go, qualification may all come down to the Nottingham v Oxford match in the final round at the end of March.

In Group B leaders Surrey quickly went 3-0 up as Dominique Lloyd-Walter, Adrian Waller and Simon Rosner all beat their Winchester opponents. Dan West pulled one back for the visitors but Adrian Grant won at top string for a 4-1 win that maintains Surrey’s slender lead.

Chasers Exeter and St George’s also won at home, both winning the first three ties against Chichester and Bristol respectively. Exeter will be marginally the happier, their eventual 4-1 win leaves them just 5 points behind Surrey but 11 points ahead of St George’s who lost the final two ties – including a 15-13 loss in the fifth for Daryl Selby against Mohamed El Shorbagy.

With three matches to play, both qualifying places are still very much up for grabs though. 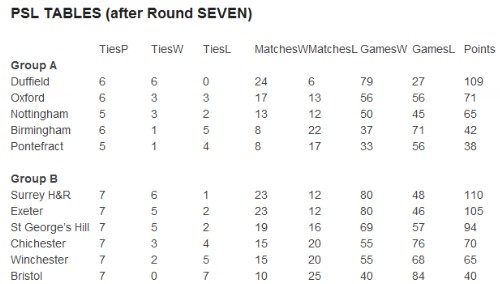