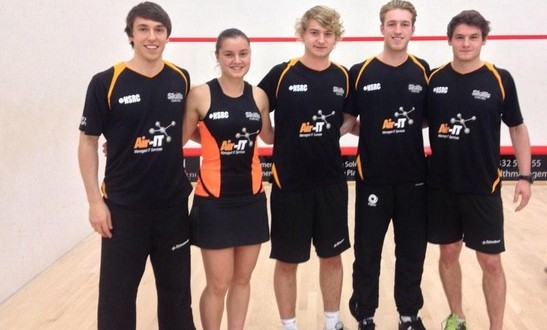 R1: Nottingham lose out at Duffield

Both teams’ number ones were missing, and with Eddie Charlton and Emma Beddoes absent from the squad as well, Nottingham made the trip to Derbyshire as underdogs.

Long testing rallies were the order of the day for the first game, which Landers-Murphy edged 11-9.

This initial sparring continued in the early stages of the second until Tomlinson stepped up and took control of the pace, dominating the next segment of the match to take Duffield 2-1 up.

For a moment, it appeared the match might be heading for a deciding fifth game, but after saving a game ball and losing two of her own, Tomlinson made it third time lucky to close out the match, 14-12 in the fourth.

Chris Longman made his debut for Nottingham against Duffield stalwart Andy Whipp, but the new recruit looked far from intimidated by the situation.

Longman kept up with the pace of his Duffield opponent for the first two games and played some inspired attacking squash of his own. But he eventually succumbed to the relentless pressure and went down, 3-0.

For many spectators, the third string clash between Nottingham’s Ollie Holland and Duffield’s Dec James was billed as the match of the night.

Played at a frenetic pace and at the highest quality, the class of each player’s attacks was matched only by the retrieval ability of his opponent.

James’ recent superb form shone through at the business end of each game, and he was able to close out the match and secure the win for his team.

Meanwhile on Duffield’s show court, the second string competitors set out their stall in the early stages of the first game, with both players fighting to dominate the middle area of the court.

The match seesawed between the two as they battled to find their range in all four corners. 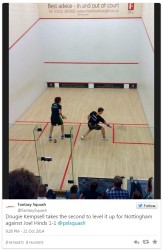 But from 7-7, a run of exciting exchanges that ended in favour of Duffield’s Joel Hinds gave him a 1-0 lead in games over Scottish No.3 Dougie Kempsell.

Game two was a masterclass in outmanoeuvring your opponent.

An exquisite cross court drop from Kempselll gave him the game, 13-11, to level the scoreboard.

Hinds then stepped up a gear and, after seeing off a valiant challenge from Kempsell in the third, closed out the final game in relatively comfortable fashion.

In the first game, the higher ranked Duffield player, Chris Simpson, seemed to be one step ahead of his Nottingham opponent, Chris Fuller.

Games two and three were more evenly contested, with both players attacking and defending superbly, but Simpson’s 3-0 win completed the clean sweep for Duffield.