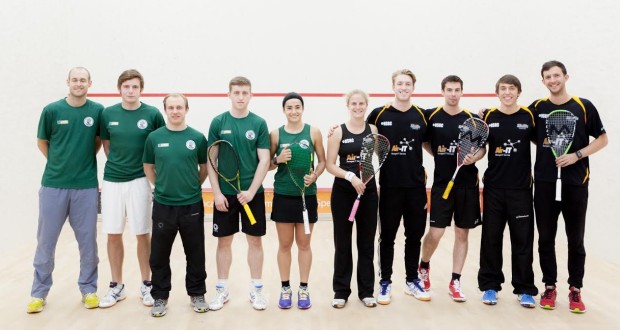 Air-IT Nottingham’s first home match was to be against relative PSL newcomers Coolhurst London. With Alan Clyne still away the team all had to take a step up. On paper this match was always going to go down to the wire. 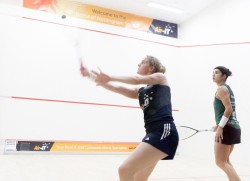 First on court was crowd favourite and Commonwealth Games medallist Emma Beddoes taking on Nicolette Fernandes. Ranked 20 and 22 respectively the match ebbed and flowed with both players displaying world class speed and agility. 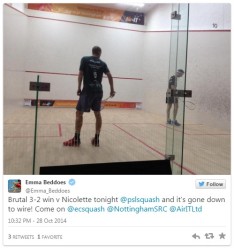 Fresh from a win against World No.9 Nour El Sherbini in Macau, Beddoes looked sluggish at the start. Fernandes took full advantage and took the one sided first game. The second game was hotly contested with Fernandes maintaining a short lead until the business end with Beddoes sneaking it 12-10.

The third was again one sided in Fernandes favour with Beddoes visibly tiring. At this point it looked like Beddoes was down and out, but with the Nottingham crowd roaring Beddoes pulled out phenomenal retrieving and managed to control the pace eventually breaking down the World No. 22. After a gruelling Match Beddoes came out on top winning 3-2. 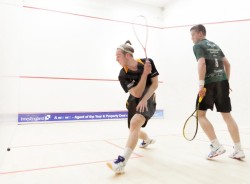 Next on court was home grown talent Ollie Holland against rising star Joe Green. Holland took the first game 11-7. Green dug in and managed to level it 1-1. Holland proved too strong for the 19 year old from Watford closing the match out 3-1. 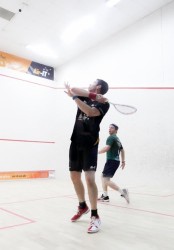 Team manager Mark Fuller faced James Earles. Fuller was out for revenge after losing to Earles last season 3-0. Earles proved too strong for Fuller in the first game winning it 11-7. Fuller showed promising signs after taking the second game but could not match the accuracy and tenacity of Earles. Despite the Nottingham crowd doing everything they could to pull Fuller through Earles won 3-1. 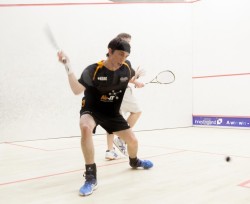 With Air-IT Nottingham up 2-1 Chris Fuller takes to the court to play Scottish No.2 Greg Lobban. The first game was tight with Lobban sneaking it 11-9. Fuller could not match the relentless pace set and lost the next two games.

Boiling down to the last match all of the pressure was on Nottingham’s Eddie Charlton clashing with Nicolas Muller. Separated by 30 places in the World Rankings Müller had the upper hand.