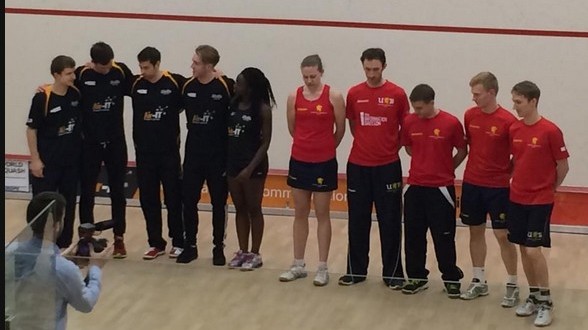 In Air-IT Nottingham’s second home game of the season they faced the newly rebranded, ‘Birmingham Lions’. In the last five encounters in which Nottingham team have hosted the Lions, they had yet to be defeated. With that in mind, the local team went into this fixture eager to consolidate the previous week’s stellar performance with another home win that could lift them from the bottom of the standings of a very tightly contested Premier Squash League. 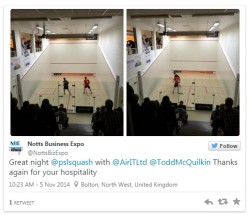 First up in the ladies’ string, newcomer for Air-IT Nottingham Sophie Lemom took on the accomplished world number 17, Sarah Jane Perry. Perry stamped her authority on the match and kept Lemom buried deep in the back of the court, refusing to let her hit her stride. She took the first game 11-2. Perry continued to dominate the exchanges of the second game, and despite showing flashes of hitting the punishing length she is capable of, Lemom remained firmly on the back foot. In the third, Lemom started to get into the rallies, but Perry proved too strong and unleashed her full inventory of attacking shots to take the game 11-5.

World number 165, Mark Fuller, faced Birmingham’s Chris Hall in the third string match. Fuller seemed content to contain the attack of his Birmingham opponent. A run of points for the Birmingham player from five all, performing well above his world ranking of 294, was enough for him to close out the first game 11-6. Undeterred by dropping the first game, Fuller returned for the second looking focussed and continued his display of clinical, solid squash. Hall started to run out of ideas and Fuller took a 7-2 lead, to the crowd’s delight. He continued to push further up the court and turned the screw on his tiring opponent Taking the game 11-8, and showing no sign of letting up the pressure in the third. A commanding performance culminating in a decisive cross court nick gave him the game. Fuller went for the kill in the fourth, and with a final fist pump and roar from the crowd took the match three games to one.

The fourth string match saw the dynamic Ollie Holland from Nottingham take on the guile and experience of Birmingham’s Jonny Harford. The beginning of the first and second games were evenly matched, but towards the business end of both the quality of Harford’s exceptionally measured lengths and sublime drop shots shone through. Any lose shot or half chances from Holland were dealt with severely, and he took a 2-0 lead in games over the Nottingham player. It seemed for a moment that Harford would not be able to keep up the quality of shot he had displayed for the first two games. Holland took a 5-3 lead and looked strong in the third, but Harford was able to dig deep and close out the match 3-0.

For the first two games of the second string match between Nottingham’s world number 53, Eddie Charlton, and Birmingham’s world number 162, Joel Makin, it was the higher ranked player who seemed comfortably in control. Charlton displayed how skilfully he could move his opponent around the court, and although Makin played an admirable retrieving game, he succumbed to Charlton’s pressure and Nottingham raced to a 2-0 advantage. 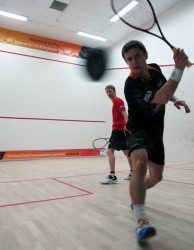 Joel came out firing on all cylinders in the fourth, and stunned Charlton and the Nottingham crowd by racing to a 9-3 lead. It was clear that Charlton was facing a completely different player to the Makin of the first two games. Despite a comeback from the Nottingham number two, Makin took the third 11-8. A refocussed Chalrton stepped back on court for the fourth game and quelled the young Birmingham player’s comeback to finish the job, three games to one.

For the second time in two weeks, Air-IT Nottingham’s match came down to a first string deciding clash. The raw power and pace of Nottingham number one, Alan Clyne, was up against the elegant shot play of Birmingham’s Chris Ryder. The first two games went in favour of Clyne by the finest of margins. Ryder produced some flawless squash to take the third game, but despite an early lead in the fourth, Clyne’s persistence won him the final game and secured another home victory for Nottingham.