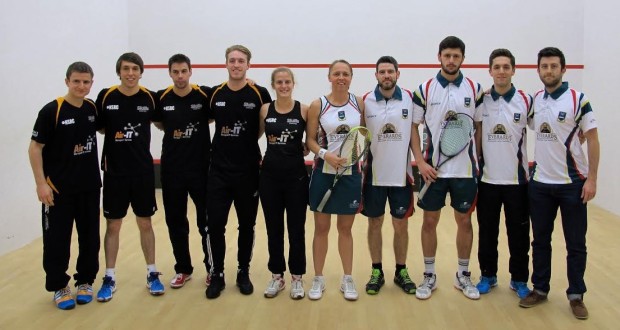 Air-IT Nottingham visited PSL newcomers Everards Leicester for their fourth round encounter. The home team were hungry for their first win, and the visitors were looking to produce a result to lift them into playoff position before the Christmas break.

In the women’s string, Nottingham’s Emma Beddoes took on Leicester’s experienced Tania Bailey. Bailey went in to the first game clearly intending to take the game to her younger opponent, going for her shots from the first rally. Beddoes had an answer to everything that was thrown at her, and took the game 12-10.

In the second, Bailey was able take better control of the pace. She looked far more comfortable in this game, but simply staying with Beddoes was not enough; the Nottingham player edged the game by the same scoreline as the opener.

Beddoes was clearly the fresher player when the two came on court for the third time. Still attacking with quality, and retrieving at a pace high enough to turn rallies on their head when Bailey gained the upper hand, the Nottingham stalwart ran away with the final game and closed out a convincing 3-0 win.

On the adjacent court, two players with huge presence squared up for the third string clash. For Nottingham, 29 year old Mark Fuller took on the British Under 19 National Champion, George Parker. The fast paced rallies grew longer and more testing as both men settled, and Fuller came out on top of a tightly contested first game .

A fired up Parker upped the pace of his hitting in the second game, and shocked Fuller to race to a 10-1 lead, to the home crowd’s delight. Not one to capitulate, Fuller put in some brutal rallies at the end of the second, but was ultimately unable to stop Parker levelling the match.

In the next two games, the momentum swung from one player to another. Both were able to dominate the proceedings at times and both were clearly prepared to leave everything they had on court. In the end it was the younger player, bolstered by a fiercely partisan crowd, who was able to take a fifth and deciding game and level the match score between the teams.

The early exchanges between Nottingham’s Ollie Holland and Leicester’s Darren Lewis were closely contested, but Holland always seemed to have slightly more time on the ball and was able to take advantage of some loose play from the Leicester representative to take the first game 11-7.

Although he dropped to an initial 6-3 deficit in the second, Holland then really started to find his range in the front corners and went on to win eight out of the next nine points to push on to a 2-0 lead.

The third game had a similar story, and despite one last push from Lewis giving him a 9-6 lead, Holland’s resilience was too strong and he staged an impressive comeback to win 11-9. After this fourth string encounter, Nottingham lead by two matches to one. 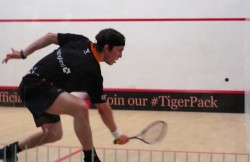 Ranked 121 in the world, 51 places below his Leicester opponent, Chris Fuller stepped up for Nottingham to play Ben Coleman as an underdog. In the opening rallies, he seemed slightly uncomfortable whereas Coleman thrived in front of his home crowd. Leicester’s man injected the majority of the pace into the first game and took it 11-7. It was clear that Fuller would need to do something to level the playing field. Resorting to precision shot play, he stayed with Coleman point-for-point to 9-9 in the second, but still fell just short, losing 11-9. Still he refused to give up.

As his attacking game grew in quality and his confidence increased exponentially, Fuller dug in to take a nail-biting tie-break in the third and pull a game back for Nottingham. His display of tactical, aggressive squash continued into the fourth, and suddenly the match was levelled.

At this stage there was nothing between the players, but another increase of intensity in the fifth saw Fuller push on to a 10-5 lead. Despite an admirable comeback from Coleman, the Nottingham player took the final game 11-9 and secured victory for the visiting team.

Although the win for Nottingham had been assured in the second string clash, the first string battle did not lack intensity. Both players moved rapidly around the court and chased down every shot, but there was a certain elegance to the pace of Leicester’s world number 11 Daryl Selby that the Scottish number one, Alan Clyne, could not match.

Selby took a 2-0 lead, but a slight lapse in his concentration was dealt with severely by the Nottingham player, who took the third 11-5. Clyne consolidated this by closing out the fourth 11-8, but was unable to wrestle control of the fifth back from the experienced Selby, who took the final game in the third five set match of the night. 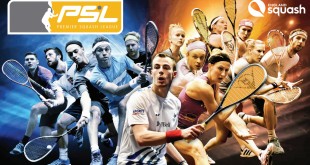