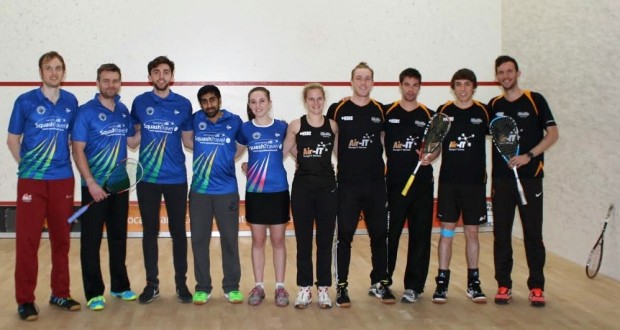 R10: Nottingham lose out at the last

Air-IT Nottingham’s Premier League Season all came down to one match on Tuesday where at the prestigious Nottingham Squash Rackets Club the side took on Pontefract for a chance to make the PSL Playoffs for the first time in 4 years.

They started the night in 4th place 4 points behind Coolhurst London and 3 points behind Birmingham. They would need to top both teams to finish in 2nd and take the playoff spot.

First up for Air-IT tonight was Emma Beddoes who has been undefeated for Air-IT Nottingham this season in PSL. She continued her run of form using her experience and playing at a high tempo to claim a comfortable 3-0 victory over Pontefract’s Katie Smith.

At number 4 for Pontefract Taminda Gata-Aura started the game well, taking the ball in well to the front and moving fast with Nottingham’s Ollie Holland struggling to contain him. The second game was tighter with Holland finding a better length and making it tough for Gata-Aura to attack. Holland took the second 11/9 to level the score at 1-1. In the 3rd and 4th Holland was to strong, hitting deep to push Gata-Aura back, once he found his short game as well it was one way traffic. 3-1 to Air-IT Nottingham.

It was Pontefracts Alex Hodgets who claimed first blood at no.3 taking the first game 13/11 against Mark Fuller in a long drawn out affair that lasted almost 20 minutes. The first game seemed to have taken it’s toll however and a promising start in the second for Fuller turned into a run of points and a rout with the next two games falling quickly 11/4 and 11/3. Hodgets fought back in the 4th but in the end it was a comfortable win for Air-IT Nottingham who were now 3-0 up in the tie.

With the overall match already decided focus at Nottingham Squash Club turned to the side’s possibility of making the playoffs for the first time in 4 years. Results elsewhere were not going Air-IT Nottingham’s way with Coolhurt London and Birmingham already 3-0 up. Air-It Nottingham really needed Chris Fuller at 2 to come through with a win to give Charlton at no.1 string some leeway against ex World No.1 James Wilstrop but it was not to be. From the start it was Pontefracts Lee Beachill who controlled the pace of the game making Fuller do all the running, despite a valiant attempt the home player was always up against it, 3-0 to Pontefract and Air-IT Nottingham needed a big result from their Captain to keep them in with a chance of the playoffs.

Defeating an ex World No.1 is never an easy challenge especially when they have just come back from injury and are determined to regain their former position. Wilstrop started well with his usual precision hitting moving Charlton to all 4 corners of the court. The Nottingham man did not go down without a fight however and as the game progressed made it a progressively more even contest with some breathtaking retrieving to hang in. After a fantastic spell to end the 3rd game with Charlton taking it 11/7 and a good start to the 4th it was Wilstrop’s experience that decided the match in the end, holding his nerve in the tie break to take the game 12/10 and the match 3-1.

It has been a fantastic season for Air-IT Nottingham. Despite eventually finishing in 4th place they won 7 out of 10 of there PSL fixtures and have built a solid home grown talent base from which to drive forward into next season.