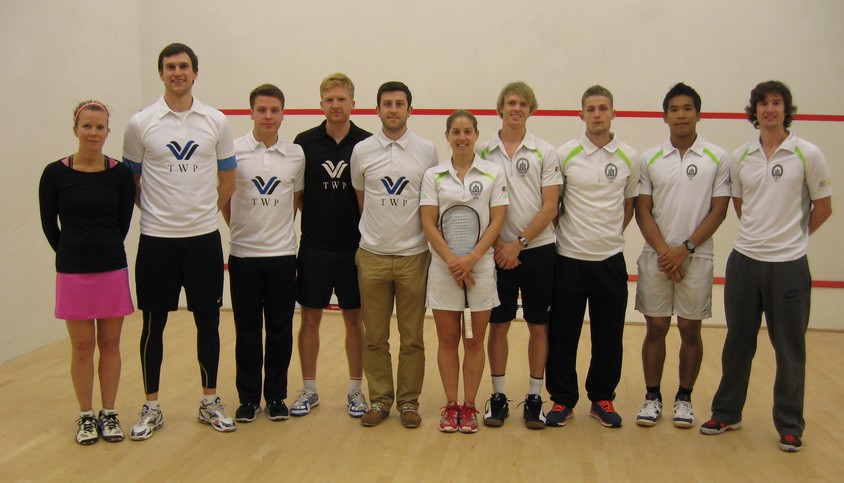 Team Chichester entertained TWP St George’s Hill in round 4 of the PSL, in what looked to be the fixture of the season, so far, at Oaklands Park, and what a match it turned out to be!

Lauren Briggs of Chichester went into her match against Dominique Lloyd-Walter as the slight favourite.   Dominique, however, had other ideas!   Briggs may have been suffering slightly from jet -lag, however take nothing away from Dominique who played inspired squash from the outset and made good use of the lob when in trouble.   Dominique took the first game; Lauren appeared not to be able to find a deep enough length with which she struggled all night.   Lauren nicked the second 11/9 before Dominique continued in the same vein in the third and fourth games to put the visitors one up on the night.

On the adjoining glass-back court Nafiizwan Adnan, playing his first match for Chichester this season, was having a ‘battle royale’ with Tom Richards.   Richards got off to a flyer as Adnan struggled to get going in the first.   Adnan fought back to take the second with some outrageous retrieving all round and, a really exciting match ensued.   Adnan forged 2-1 ahead and both players battled hard, with great counter drops and use of all the four corners of the court and it was Richards who levelled the score to take it to a decider.

Nip and tuck all the way, Richards reached match point first and was denied the victory on 3 occasions before Adnan prevailed to seal it 14/12 in the fifth to put the match all square.

Next on court Anthony Graham (CHI) took on Phil Nightingale in a very argumentative match.  Graham kept his composure after a tight second game which went to tie-break which he finally won 12/10.    Graham proceeded to up the pace and ran away a comfortable winner 11/3, 11/2 to put Chichester 2.1 on the night.

Robbie Temple (CHI) played Charles Sharpes in the penultimate match and after he was 10/7 up in the first, and then losing it 10/12, he tightened up his game to take the next 2 games 11/4, 11/1.   Temple was now playing inspired squash.   He kept his head and from the midway point he forged his way through and took the 4th, 11/6, to put Chichester 3.1 up.

Team Chichester has now won its fourth match and continues its winning streak.

Finally the dead rubber match between Chichester’s Jonathan Kemp (WR28) and Daryl Selby (WR10) but there was nothing dead about this match!   Kemp started well with superb volleying and dropping with great style but Selby was equal to it.   Kemp finally snatched it 11/8.  There was more of the same from then on although Selby was the steadier player with Kemp finding too many tin shots.  Selby moved to 1.2. up.

Selby continued in the same manner in the fourth and looked set to wrap it up 1.3.   Kemp, however, pounced on a decision with which Selby didn’t agree and a lapse of concentration enabled Kemp to take the 4th game 11/8.

On to the deciding game and  I can honestly say that in 40 years of being involved with squash it was the single most brilliant display of squash I have ever been privileged to witness.  Kemp hit nick after nick and matching it with brilliant drops and lengths he wrapped it up 11/1; an excellent win for Kemp and a superb victory for the team.

Only two teams in the PSL remain undefeated, Duffield (League A) and TEAM CHICHESTER (League B)!