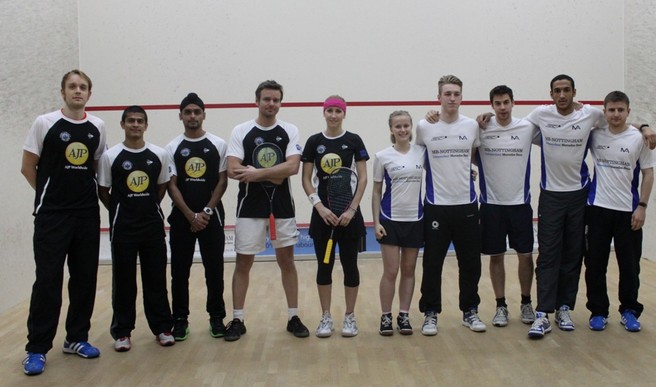 The start of last night’s Round 4 PSL match was delayed slightly as our staff controlling the doors tried to cope with one of the busiest nights in recent times. Tickets sales reached 173 (probably 30+ passed our recommended level) so with coaches, team managers and officials, you’re no in excess of 180 people.

The result? An electric atmosphere and an excited group of players who love nothing more than playing in front of enthusiastic sell out crowds.

After the line-ups of the teams a short presentation was made by Pontefract’s World No.1 James Willstrop who represented trophies to our THREE Junior National Champions – Ollie Holland (Boys U19), Emily Whitlock (Girls U19) and George Parker (Boys U17). A truly great gesture from Willstrop which the three champions will cherish. 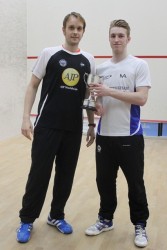 The men’s match was a tough one to call on paper. We had a youngster at the top of his game having won his first three matches of the PSL season, and a retired player who has achieved so much in the game and still likes to train and compete when he finds the time away from his PSA duties. He may be retired but like so many others I’ve seen in recent months (Nicol, Power, White, Palmer, Parke, etc) is still an absolute joy to watch and so much can still be learned from arguably one of the best ball strikers with the smoothest and most deceptive of swings in modern times. Holland himself plays not to dissimilar a game. Keeping the ball straight is a tactic of his, and the holds this boy can play will undoubtedly begin to hurt players higher up the rankings as he begins the climb up the way. On the night though it was Beachill’s experienced that proved pivotal. After a close opening first game he closed it out in the blink of an eye. The second was similar in that Holland was competitive throughout, but again it was Beachill who played the smarter squash when it counted. The third had Holland’s name written all over. Pulling clear from 6/6 he earned himself a couple of game balls. Beachill saved them. Holland earned another. Beachill saved again. Holland had a fourth and final one saved, and after two lengthy rallies in favour of the elderly player, Pontefract had the first points on the board after 46 minutes of entertaining squash. 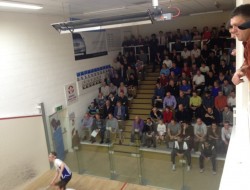 The ladies matched looked close on paper, and that’s exactly how it turned it. The games ebbed and flowed. Both were playing some equally brilliant squash and in the first three games it was only the latter part of each game that one of the players was able to make a decisive move. Kippax took the first, Whitlock the second and third. The crowd had spilled over from the Holland/Beachill match and it was at this point that Kippax changed her game ever so slightly. Her line and length improved with it, and winners started to stream from her racket after some patient and effective build-up play. After losing the fourth Whitlock tried to slow the game down by using more height on the front wall, but her opponent was happy to remain patient and clinical when the opportunity eventually came to her. Whitlock dug deep but it just wasn’t enough as a run of six unanswered points from Kippax closed out the match in 50 minutes to put Pontefract 2-0 up in ties.

Back over on the show court and the crowd were preparing themselves for their very own current Under 19 European Champion Declan James (W#131) taking on Pontefract’s Indian No.1 Saurav Ghosal (W#22).

A mis-match on paper you would say but James is a player on the up and on home soil can be devastating. The match started in quick fashion as both players went on the attack early. From 4/4 Ghosal pushed ahead to close out the game. The whole of the second was a continuation of the latter part of the first. Ghosal planted himself at the centre of the court and worked James around him for rally after rally. On the rare occasion when James was able to move Ghosal, the Indian used his phenomenal speed to neutralise any threat. The third produced a nice swing of play in favour of the tall Nottingham player. A run of four points at the start of the game and five towards the end helped James pull a game back. The fourth game however saw Ghosal pull away from 2/2 right through to 9/2 as James found himself on the end of a number of brutal rallies. A couple of flamboyant nicks from our man kept the game and the crowd interested but ultimately it was too late and Ghosal sealed the game, and with it the third tie and the overall match the Pontefract. The 46 minutes of squash was thoroughly enjoyed by the crowd would were very appreciative of the opponent their player was up against. 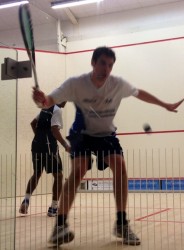 The third string match was being played at the same time as the above match and was therefore ‘live’. MB Nottingham’s Mark Fuller had a stern test ahead as he took on a player hot on form on the PSA tour having reached the final of the Valencia Open as a qualifier only two weeks ago. Harinder Pal Sandhu has pushed into the top 75 in the World in recent months and is another fine product of Pontefract squash. Fuller started as he always tries too, hard and fast. Sandhu is as cool as they come though. We reached 8/8 in the first before Fuller closed out the game courtesy of some well worked rallies. Games two and three were strange in that big blocks of points were racked up by both players. In the second, Sandhu took the first six and last five points to pull level. The third saw Fuller take six in a row to move to 8/3, only for Sandhu to reply soon after with six of his own to level at 10/10. Only two points a row would be required to win on the tiebreak, and it was Sandhu who earned them courtesy of two errors from Fuller. The fourth was a much more cat and mouse affair. Never more than a couple of points separated the two, however it was always Sandhu out in front. Fuller stayed with him to 8/9 but one very well worked rally and one delightful volley nick sealed the match for the impressive Indian after 52 minutes of play. Fuller was pleased with his performance, magnanimous in defeat, but ultimately disappointed to have lost in the MB Nottingham shirt.

So, with Pontefract 4/0 to the good and with the World No.1 stepping onto court for them, the clean sweep was surely an inevitability, right? Wrong. His opponent, MB Nottingham’s newest recruit Alan Clyne, is not Scottish No.1 and World No.31 for no reason. Clyne was playing his second game for the team but his first on home soil in front of an over sell-out crowd. He had very little to lose too. He was playing the World No.1. He was expected to get trounced 3/0. He was also a little short of confidence have suffered a small drop in form in recent months. The crowd I know were eager to see what their new signing had to offer, but I also know they held out little hope.

James Willstrop is as professional as they come and for that reason I know he didn’t take Clyne lightly. He never does. Not with ANY opponent. When we speak of blocks of points in the Fuller/Sandhu match, this one had plenty of that too. Clyne got off to a flyer, catching Willstrop a little off guard and taking the first five points of the game. Willstrop returned the favour with some deadly accurate play to take nine points in a row. From nowhere though Clyne replied with six of his own as he took the first to a large and surprised sounding roar from the Nottingham crowd. Before going onto the second it should be pointed out how fast paced this game was. Clyne pounced on everything he could, in many cases things he couldn’t. Willstrop kept the pace up in his own way.

It was both delightful and fascinating to watch. The second saw Clyne amazingly try to go faster. Willstrop is too smart for this though and with a slight drop in Clyne’s accuracy levels, began to assert himself on and around the T. Game to Willstrop after some wonderful squash. It was at this point I noticed that both players were wearing heart rate straps. A possible reason for the ridiculous pace of the match? The third game was a cracker. Both players pushed on with the pace. Willstrop was finding some majestic shots but Clyne was by no means left out in this department. We got to 3/3, 5/5, 8/8 before anyone was able to pull away. That player, to the joy of the home crowd, was Clyne. Up to 10/8 and a stroke on his way to seal the game… Or not. Clyne was half out the court before hearing the “YES LET” call. Cue uproar from the crowd. I think Willstrop even had a little chuckle whilst looking towards the front wall.

Willstrop used the call well and pulled level at 10/10. Clyne gathered himself just in time to pull out a counter drop winner and a backhand cross-court volley nick having scaled much of the left side wall just to even reach it. The crowd were up on the feet and our home debutant was 2/1 up on the World No.1. Hold on though. Willstrop is World No.1 for a reason. Even when under pressure on the score board, he manages to pull of the most impressive of squash. I’d go as far as saying he plays better when the pressure increases. From 4/4 in the fourth we dared to think ahead. We should have known better. Willstrop’s racket turned into a wand in the flash of an eye as seven of the next eight points all went his way. So a decider. Just what the crowd deserved. We got a fifth game almost identical to that of the fourth. Clyne tried to flick up a gear with the pace, but it was coming at a real cost now as on many occasion he was forced to double back to the back wall, working past the large frame of the Yorkshire man on his way. With the legs of Clyne now perhaps a little worn out, Willstrop seized his moment and played near perfect squash moving from 3/3 right through to winning the game.

It was 51 minutes of the best squash the Nottingham crowd has witnessed this season. Their new signing had won them over and I for one see this blossoming into a fine relationship between player and Club. Willstrop was as class as ever. He showed his appreciation to the crowd and stuck around to sign autographs. Well played sir.

It’s difficult to call it a successful night when you’re on the end of a 0/5 defeat, but that’s exactly what it was. We had all our sponsors in amongst the largest crowd here in recent times. We got to watch the World No.1 in action. We got to watch our new number 1 in all his glory. Most satisfactory though, we got to watch our players battle for every single point. The Nottingham crowd ask for no more than this so a big thank you to every single one of you. Not only will we bounce back, we’ll bounce back stronger.

Next match for MB Nottingham is an away fixture to what we believe will be a very strong Oxford team with three top 20 World ranked players. The table shows just how tight things are and how important every game of every tie of every match is. My team know this and we’ll be fighting harder than ever over the remaining six matches.