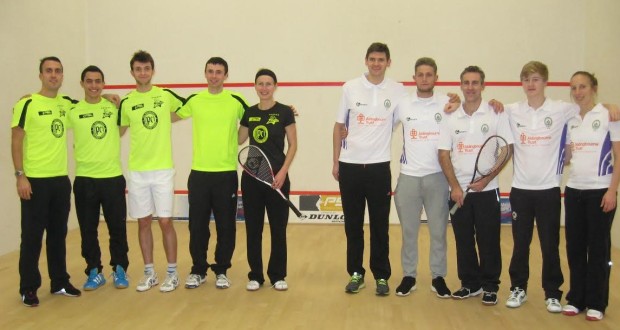 In the final round of the first half of the PSL season, Team Chichester played Virgin Active Surrey (defending champions), a squad which has recently taken the top spot away from the city team. It was, as expected, an extremely tough encounter.

First on court, Team Chichester’s Emma Chorley made her home debut for the squad; she played WSA5 and National Champion, Alison Waters.

This was always going to be a tough ask for Emma but she equipped herself well and matched Alison for pace. The games were all well contested but Alison ran out a 0.3 winner to put Surrey 1-up.

Alex Gough was first to pay on the championship glass-back court and he was against Lyell Fuller who, in April of this year, played the third place play-off final in the European Junior U19 Championships. Gough mixed the pace well in the first and Fuller hit eight tins [all unforced] as he just couldn’t find his range and Gough snatched it 11-7. Fuller then found his range and hit back immediately with a 4-11 win in the second game. Gough began to struggle and Fuller’s error count was much less as he took the third 6-11. In the fourth the players were neck and neck throughout; Gough continued to mix it up and Fuller kept taking it early. It went to 10-all but Gough just lost out on a game ball and Fuller clinched it in the end 11-13. Surrey now 2.0 up.

Following on from Emma Chorley’s match, Kyle Finch made his debut for Team Chichester against Surrey’s Robert Dadds. Finch, who only last week celebrated his 16th birthday, is the youngest Englishman to play in the PSL. From the outset Finch dominated the match with pace and tempo and with his better shot variation and selection, he won in straight games 11-4, 11-6 and 11-4 (in 28mins).

Next on the glass-back court, Chichester’s Robbie Temple was hoping to close the gap, as he took on WR24 Fares Dessouki [Egypt]. The gallery was treated to an excellent match with so much great skill on show from both players. Temple drew first blood with a superb range of shots and outstanding all court squash to win it 11-6. Dessouki surged to an early lead in the second and ran away with the game 4-11. In the third game Temple built up an 8-5 lead, but Dessouki fought back and, with some excellent play, pushed through to snatch it 8-11. Dessouki was always the odd point up in the fourth and he maintained the upper-hand to win the match 8-11.

The final match of the evening was between Chichester’s new number one, WR26 Adrian Waller and WR6 Peter Barker. Waller forged a lead in the first and although Barker managed to fight his way back in to the game Waller played error free squash to win it 11-9. Barker tightened up his game in the next and upped the pace and repeatedly hit the corners well to take the next 8-11. By the third Barker’s game was in full flow and he forced errors and tins from Waller to win it 8-11. The fourth followed in the same vein and Barker built up a 3-10 lead before converting it 6-11 to give Surrey a 1.4 victory.

After the Christmas break Team Chichester hopes to sign a couple more players to strengthen the depth of the squad.

Previous R4: Surrey get back to business
Next R5: Air-IT Nottingham hold a playoff spot for Christmas