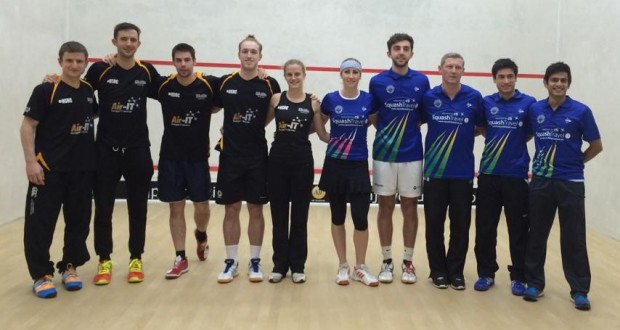 After being thrashed in the first game of the season Air-IT Nottingham have had to fight for every point to climb to second place at the half way point of the season. Last night the team faced bottom of the league Pontefract away from home knowing that a convincing win would see them into the playoff positions for the first time this season.

Beddoes rounded off a tremendous first half of the season winning yet again tonight to make it 3 wins out of 3 for Air-IT Nottingham’s most successful player.

Having returned from the Women’s World Team Championships in Canada with a gold medal on Sunday Beddoes looked in great form right from the start. She moved quickly, volleyed well and attacked the front of the court. For two and a half games she controlled the pace and despite a late Kippax rally right at the end of the 3rd there was always only going to be one winner with Beddoes pulling off a victory yet again for the Air-IT Nottingham.

Holland continued his good run of form for Air-IT Nottingham.

In the opening two games Holland controlled the pace of the game, putting the ball into good areas taking them both comfortably 3-0. In the third Hodgets fought hard but the match was always going to go only one way and despite the game heading into a tie break it was Holland who came through 3-0.

It was a match that was alway predicted to be a battle. Both players use similar attritional tactics to see them through matches making this unlikely to be over quickly.

Long rallies were the norm throughout the match with the score line see sawing throughout. Parke took the first only to see Fuller come back in the second. Parke came back to take the third only for Fuller to come back again and take the forth. The fifth was the only game that was ever really tight with the players going point for point until at 9-9 an exhausted Parke finally allowed Fuller to pull away and take the match 3-2 and decide the tie in Nottingham’s favour.

Aqeel looked the sharper of the two and despite a late surge from Charlton took the first game 11-9. Charlton was tactically more aware in the next two games with Rehman visibly tiring. The forth game saw Aqeel play more aggressively and take the game to Charlton hitting some good winners in the process. The fifth was fairly one sided with Charlton again stretching out a lead and not looking back. A good quality match for the Pontefract crowd.

The number 1 string match was a tight affair with both players moving well. In the end the Pontefract number 1 seemed to find just a few more winners than the Nottingham man with Ghosal coming through 3-1.

“A great team win today against a strong Pontefract side,” said Clyne. “Disappointed that I couldn’t make it a clean sweep but Saurav played well at the crucial times. Looking forward to the second half of the season now we’ve put ourselves in a position to make the play offs.”

Air-IT Nottingham’s first match after the break will be against their biggest rivals and league toppers Duffield on the 27th of January. For information on tickets call 0115 9503756.

Previous R5: Chichester lose out to strong Surrey
Next 09 Dec, Round FIVE roundup