Nottingham had already played Newcastle away in the first match of the season where they secured a win 5-0. Nottingham were keen to maintain the winning streak and put forward a quality line up against the Newcastle side, including former world number one Nick Matthew and GB commonwealth athlete Declan James.

Newcastle/Northumberland got off to a strong start when Lisa Aitken took the first point to put the visitors in the lead, but Nottingham hit back to take the remaining four matches to earn a double win against Newcastle this season.

First up on court for Nottingham was UoN Scholar Coline Aumard against Newcastle’s Lisa Aiken. Aiken confidently took the first game but Coline fought back in the second game, creating a competitive final few points, meaning a two point lead was needed to secure the game. Aiken came back to take the game and therefore match 11-13, securing an early lead for Newcastle.

The second game was between Nottingham’s Lewis Walters and Newcastle’s Owain Taylor. The pair have played against each other many times before so it was all to play for in a competitive match. Taylor took the first game for Newcastle 8-11 but Walters came back, playing some quality squash to claim the final two games and therefore the match 11-5, 11-6. After collecting Nottingham’s first point of the evening Walters said “Owain had a great first game but I brought it back in the final two to bring back the first point for Nottingham.”

Next up for Nottingham was Richie Fallows playing against Newcastle’s Rory Stewart. A closely contested first game, set the tone for the match, finishing 11-13 to visitor Rory Stewart. Fallows came back to the second game focused and carried that through to the end winning the final two games and therefore match for Nottingham, 11-6 and 11-1. He added, “It’s nice to have got the point and take a little pressure off a little for the final two games!”

The penultimate match was between Declan James for Nottingham and Robert Downer for Newcastle. James took the first game 11-6. He remained calm and focused to win the second game 11-8, securing the overall fixture win for Nottingham.

Closing the evening in Nottingham was former world number one Nick Matthew against Australian Cameron Pilley for Newcastle. The match was highly competitive but Matthew’s quality and experience dominated, winning the first two games, 11-7 and 11-8. Matthew securing Nottingham’s fourth match of the evening, leaving the final score 4-1.

The strong line-up delivered the win, to ensure Nottingham go up a league place to third- a great way to start 2019! Watch the replay below … 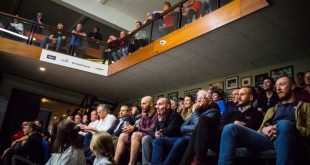