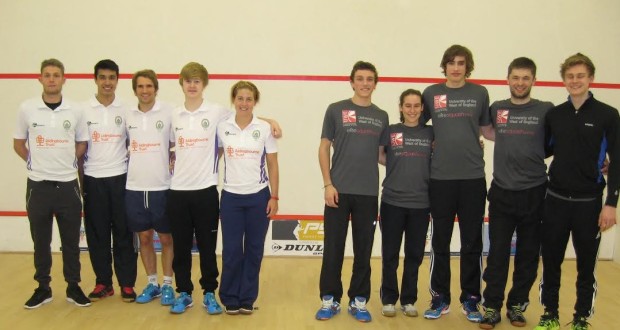 R7: Chichester lose out to Bristol

The second half of the PSL league season resumed last week and round seven quickly followed on this week, with a number of matches between teams separated by just a few points. Team Chichester played Bristol [3rd and 4th respectively in the league after round 6]. Only 2 points separated the 2 squads and Team Chichester was determined to keep ahead of its rivals and try to widen the margin in the race to the play-offs.

First on court, Team Chichester’s Lauren Briggs produced work-woman like performance and dispatched Kip Quiney in double quick time. The youngster ran bravely throughout and was involved in some good rallies but points were hard to come by for her and Briggs ran through an 11/3, 11/3, 11/4 winner.

Meanwhile, on the glass-back court, Chichester’s Tristan Eysele played Bristol’s Mike Harris (WR129). During the first 2 games Harris was frequently hitting nicks and both players played a hard-hitting game. Harris nonetheless forged a 0.2 lead. Eysele then began to read Harris’ nick-hitting and was able to get forward to force the errors from Harris. He clawed back the third game 11/8 to keep himself in the match. During the fourth Harris re-established his authority and control and was always a couple of points ahead of Eysele to take the game and match 6/11.

Following on from Lauren Briggs’ match, Kyle Finch, for Team Chichester, played Josh Masters. The two youngsters battled well during the first game; there was nothing to separate them. Masters’ good all court squash enabled him to snatch the game 12/14. In the second game Finch never really got his game together and Masters quickly wrapped it up 1/11. The third game was much more competitive as both players found their range. Masters, however, just had the edge with his fast flowing squash and he managed to run through to a 9/11 win for the match.

Next on the glass-back court, Chichester’s new signing, Sanjay Singh, made his debut for the squad and played Tom Ford. Both players are left-handed and very gifted with superb racket skills. The match was ‘littered’ with fantastic touches and both excelled at the front of the court. Ford took the first but Singh replied immediately to win the next and level the match. The third was yet another tight game with Ford the victor. In the fourth the quality of squash remained extremely high and very entertaining. There were some great cross court nicks from the front from Ford and he just kept the edge to create a 1.3 win for Bristol and give the team an unassailable 1.3 lead.

The final match was between Robbie Temple and Lucas Serme [Bristol]. Serme won the first 8/11 to take an early lead before Temple retired injured after a few points of the second.

In order to have any impact on the final positions of the league Team Chichester will be at full strength and the squad will definitely need maximum points.

Previous Round SEVEN Roundup, 03-Feb
Next R7: Leicester fail to tame the Lions