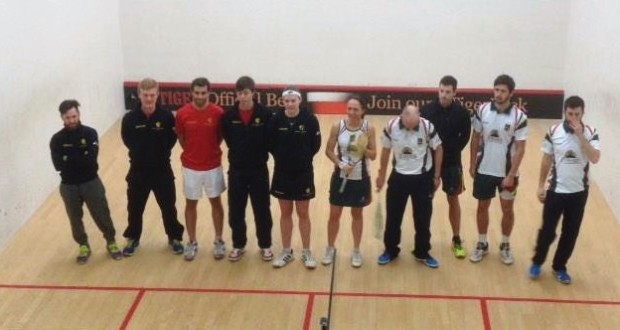 Everards Leicester fail to tame the Lions of Birmingham 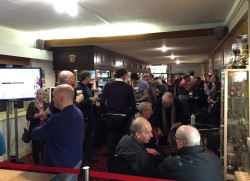 Birmingham Lions edged closer towards the playoffs, in what is becoming a very close battle for second place in the Northern Division. On paper this match looked like it would be a very tight affair, with many people predicting a 3-2 overall scoreline, but with it being hard to say who to.

First on court 5 was local favourite Tania Bailey against rising star Sarah Jane Perry. The match started well for Perry as she built an 8-6 lead with a couple of deceptive boasts from the backhand side. She continued in this vain and found herself with three game balls at 10-7. Some well constructed rallies from Tania saw a complete reversal though, and helped with an unforced error or two, she took the first 12-10. Perry came out strong in the second. She stepped up the pace and intensity of her hitting, and really put Tania under a lot of pressure physically. Controlling the middle well, she took the second 11-6. Sarah continued where she left off in the second throughout the third and fourth. She dominated the middle of the court with some powerful drives complimented with good variety going in short. She took the match 3-1, winning 10-12, 11-6, 11-4 11-5

Underway at the same time as the ladies, Daryl Selby, Leicester’s star player, took on Welsh number 1 Peter Creed of Birmingham on court 4.

The opening rallies were attritional, as both players eased there way into the match cautiously, neither one taking too many risks opening up the court while they were both so fresh. Peter edged ahead with a couple of exquisite forehand straight drives, and held onto his lead to take the first 11-8. Daryl responded well, as expected, playing positively and squeezing a few errors out of Peter, and he moved to 9-3. Peter responded brilliantly however and made it hard for Daryl to close out, coming back as far as 9-10, before Daryl took the game on his second game ball. Daryl was playing very well now, and Peter was looking like he was running out of ideas.

Daryl soaking up everything Peter threw at him and won the third 11-6. In the fourth, Peter built a solid lead with very positive attacking squash and just managed to sneak it to take the match to five. The fifth was a rollercoaster of a game. Peter built a strong lead, and the rallies were becoming incredibly exciting with the players getting back the seemingly impossible. Daryl fought strongly to come back to 9-9, but after a contentious decision found himself match ball down at 10-9. Peter then played a fantastic drive to close the match out and put Birmingham 2-0 up.

Andrew Birks, making his debut against Bradley Hindle from Malta, had gotten off to a slow start on court 5, losing the first after a number of unforced errors. He managed to up his game in the second though, really imposing himself by increasing the pace and hitting a number of impressive winners. He took the game 11-8 to make it 1-1. Hindle responded as expected in the third. Tightening his length and giving Birks a lot less opportunities to attack the front. He took the game to go 2-1 up. Birks tried to take the initiative in the fourth by getting onto the ball a lot earlier, but Hindle was very confident now and proceeded to move the ball around the court with precision and he went on to win the match 3-1, giving Birmingham an unassailable 3-0 lead on the night. 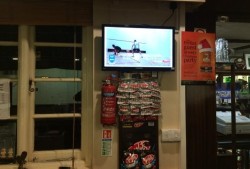 James Bowden stepped onto Court 4 against Miles Jenkins knowing although Birmingham had secured victory, there were still lots of points up for grabs, not to mention pride! #

James got off to a little bit of a slow start and Miles was attacking the front with deadly accuracy, and thus Miles took the first game 11-6. Miles then built up a healthy lead in the second game, and it was looking like he was going to win quite straight-forwardly. James had other ideas. After a few incredible rallies, with some breathtaking retrieving across all four corners of the court, James had managed to claw his way back to parity, taking the second 13-11. Miles reasserted himself in the third, leaping onto any loose balls at the front and putting in very tight drop shots. The increased intensity from Miles saw him take the third 11-6 and the writing looked on the wall when he again built up a healthy lead in the fourth. James though, yet again, refused to lie down.

We again saw some scintillating rallies, with the most incredible counter-drop exchanges in the front backhand corner and a few impressive dives from James, who was moving more like a 20 year old than a 35 year old! James battled hard to take the game 11-9 much to the delight of the crowd. The fifth seesawed back and forth, with each player etching out leads only to have them pegged back. James went from behind to being 9-7 up and only two points away from victory! Miles knuckled down well though, and his high levels of concentration saw him get to match ball 10-9. The final rally was an epic! James scrambling all over the court and the crowd were gasping, but the final shot was one too many and Miles won a classic encounter 11-6 11-13 11-6 9-11 11-9.

The last match on court saw home grown favourite and recent British Junior Open semi-finalist George Parker take on training partner and rising Welsh star Joel Makin. It was easy to see from the opening rallies that these two were well accustomed to each other’s games, as they both struggled to outmanoeuvre the other. The rallies were very long and attritional, with both players battling it out mostly at the back of the court and waiting for openings. George just proved the more deadly of the two when the chance was there, and took the first 11-9. He raced off to a massive lead in the second too, playing with a lot of confidence. Although Joel came back well, the lead was too big and George won the second 11-9 to make it 2-0. The third was similar in that George built up another lead with accurate attacks to the front, again looking very confident. He got to 10-7 match ball, and although Joel fought very well to take it to a tie-breaker, even getting a game ball of his own, George eventually took it on his fifth match ball, winning 11-9 11-9 14-12.

So the final score was 4-1 to Birmingham. It was a harsh scoreline on Leicester’s behalf, and a match which perhaps on another occasion might have gone the other way, especially with two of the matches lost only being decided by two points!

Leicester’s next opponents will be Duffield in a fortnight’s time, again at home. That will be a very tough affair, as Duffield are the runaway league leaders, and could bring a very strong side. We will need a lot of home support, so hopefully there will be a big crowd to cheer the team on!

Previous R7: Chichester lose out to Bristol
Next R7: St George’s get past Surrey in 3-2 nail-biter