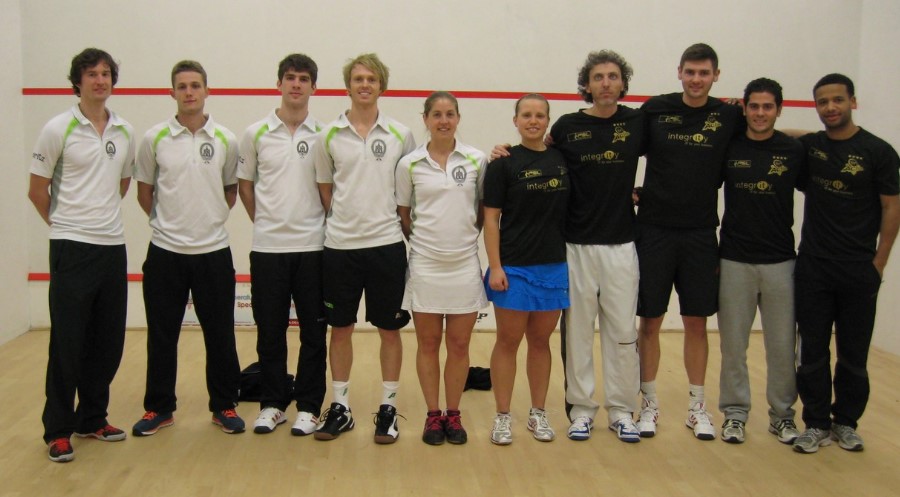 Team Chichester went in to Round 7, and its first home match of the second half of the PSL, with a superb record of 5 wins and only one loss. The opponents this week were defending champions Integrity Surrey H & R; currently joint second with the home team, Chichester. Team Chichester was victorious in the away fixture and the squad hoped to do the double over the champions; a tough proposition but the team was determined and focused on a win.

Chichester’s Lauren Briggs was on first and played well within herself and dominated the match to win 11/7, 11/6, 11/6 (in 26 minutes) and put Chichester 1-up; a great start to the campaign.

Olly Pett (Chichester & WR58) played Adrian Waller (WR39) on the glass back championship court. The opening game was steady with each player feeling each other’s game. Waller reached game point first but Pett rode the storm to take it on a tie break. In the second Waller was always ahead and stormed through to win 7/11. In the 3rd Pett forged an early 4/0 lead only to be pegged back. Pett proceeded to make Waller work harder and once again took the lead at 10/6. Pett, however, then gave away 3 easy chances to secure the game and he found himself precariously at 10/9. Waller seized the momentum to take the game on a tie-break. Waller capitalised on the swing of the pendulum and never looked troubled in the fourth to take it 5/11 to put Surrey 1.2 up on the night.

Meanwhile, Chichester’s Anthony Graham played the Italian No.1, Davide Bianchetti. The Surrey player played a solid match to take the first 2 games 6/11, 7/11. Both players worked hard and used a lot of energy in the pursuit of the 3rd. Graham valiantly fought back to take it 13/11. Bianchetti nonetheless continued to pile on the pressure in the 4th and finally won through 6/11. Both players played a similar game but the Italian’s experience made the difference in the end.

Next up on the glass-back Chichester’s Robbie Temple, WR53, took on Karim Gawad (EGY WR26) and the match turned out to be a fantastic 5 game thriller which had absolutely everything. Temple went down 0.2 (11/13, 10/12) in 26 minutes but then he steadfastly clawed his way back 11/9, 11/6 to even the score. There was nothing to separate either player throughout the match and with some fantastic retrieving and inspired play Temple squeezed through 11/9 in the 5th after 76 minutes play.

Once again Team Chichester took it down to the wire and the decider was between Jonathan Kemp WR28 and Surrey’s Adrian Grant WR17. Grant controlled the match from the outset and gained leads in the first 2 games and Kemp was, unfortunately, unable to bridge the gap. In the 3rd Kemp started off much better but a catalogue of tin shots caused his lead to evaporate. In the end Grant finished of the match 5/11 to wrap up an overall 2.3 win to Surrey.

The next match is away to Bristol and, if Team Chichester has any chance of reaching the semi-final play-offs the squad will need to take away maximum points.

Previous R7: Tense finishes all round
Next Leaders beaten in Round Eight