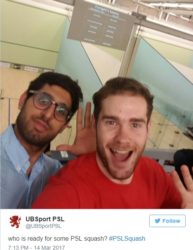 Birmingham Lions were looking to secure a big win in their last home game of the season, against Everards Leicester.

First to play were fifth strings Sarah-Jane Perry and Céline Walser. Perry looked impressive from the off, and won a competitive first game 11-9. Walser did her best to battle back, though the Leicester player found herself being controlled by Perry for most of the rallies. Perry sealed the second and third 11-5 and 12-10 respectively.

Meanwhile, a fantastic crowd gathered to support the University of Birmingham’s own Jack Turney. Turney, making his PSL debut, faced O35 National Championships finalist Darren Lewis. The young lion did his best to impose a fast, energetic style, though he struggled to make his mark against experienced opposition. Both players produced some incredible trickery, but Lewis won the crucial exchanges to ensure a comfortable 3-0 victory.

Third strings Chris Ryder and Mark Fuller were next to take to the court. Ryder demonstrated classy footwork from the off, and took the first in thrilling fashion (12-10). Fuller came back stronger, though, and began to punish Ryder with countless kills. After securing the second and third, 11-7 and 12-10, Fuller appeared comfortable as he took the fourth in tremendously efficient style, 11-6.

As the Lions faced the real prospect of another home loss, it was time for second string Jan van den Herrewegen to inspire a fight back. His opponent, George Parker, would be no pushover – though Jan appeared well prepared and won an entertaining opener 11-8. Parker rallied back well, taking the second 11-5. The home crowd grew increasingly anxious, but Jan remained impervious as he began to dominate Parker and sealed the third 12-10. Parker appeared evermore rattled as the match progressed; unable to make sense of his uncharacteristic error count. Jan calmly sealed the fourth 11-6, and handily won the match.

In the end, it would be the duty of first strings Joel Makin and Daryl Selby to decide this excellent Premier Squash League encounter. Makin recently cracked the world top 50, and seemed determined to prove his January upset victory over Selby was no fluke.

Such determination, paired with Selby’s clear frustration, proved sufficient to win Joel the first 11-6. The next fifty minutes was a juxtaposition of breathtaking rallies, and unproductive disputes – between both players, and the two referees! Joel remained solid throughout, yet coping with Daryl’s unrelenting speed and precision proved too onerous a task. After grinding out the second and third 11-9 and 12-10, Selby found little tangible resistance left in Makin; claiming a relatively comfortable fourth 11-7.