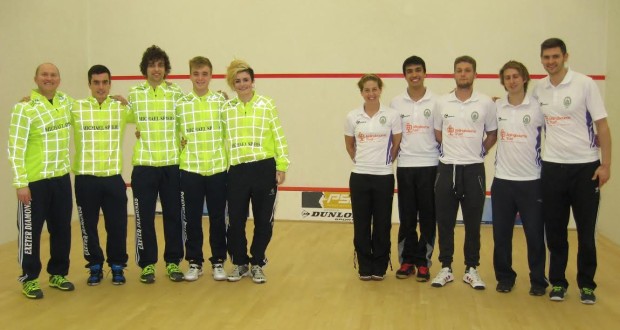 Round eight of the Premier Squash League and Team Chichester played its final home match of the 2014/2015 season. Team Chichester, currently in 4th place, required a big win in order for the squad to keep in touch of the play-offs.

The Crystal Ball predicted a 5.0 win and a 20 point boost to Chichester’s chances. The line-up for the match was strong and the players were intent on making a good win count and, the prediction come true.

Meanwhile, on the glass-back court, Chichester’s Robbie Temple defeated Luke Bishop 3/0. Bishop was game and retrieved well but Temple’s all court game of holds, flicks and general deception caught out the Exeter man on numerous occasions. Team Chichester was 2.0 up after only 30 minutes.

Following on from Lauren Briggs’ match, Team Chichester’s Sanjay Singh played Robbie Keefe who was making his debut for Exeter. Keefe gave a very good account of himself throughout the match and was rewarded with a second game win. Singh, however, swiftly regained control and with clean hitting, and accurate touches, to the front enabled him to win through to a 3.1 victory.

Moments later the second string match between Rex Hedrick and Exeter’s James Snell was also completed. Hedrick’s retrieving had caused Snell a lot of problems. Snell showed signs of fatigue towards the end of the rallies which allowed Hedrick to pick up the points and win 3.0.

Four-nil up and then Adrian Waller faced Exeter’s Tim Vail in the final match of the night. Vail got off to a great start, playing with fantastic touches coupled with discussions with the referee which distracted Waller and upset his concentration. Vail won the first 9/11.

The Exeter player continued in the same vein in the second and really needed a 0.2 lead; a score line from which Waller would have found difficult to recover. Waller, however, held his nerve during the latter exchanges to take the game 12/10. Waller’s confidence continued to grow as he upped the pace out of Vail’s comfort zone to wrap up the third game and forge a 2.1 lead.

In the fourth Vail began to tire but was nonetheless was still in the match, although he was increasingly doing more work to remain so. Waller forged ahead to take the match 3.1 and give Team Chichester a 5.0 win to keep the squad in the hunt for the play-offs.

The penultimate match will be away to St. George’s Hill and will be crucial. A good win is needed but, until March 9th, when round 9 resumes, everything is still looking wide open.

Previous R8: Lions lose out to Nottingham
Next R8: Leicester welcome the Invincibles