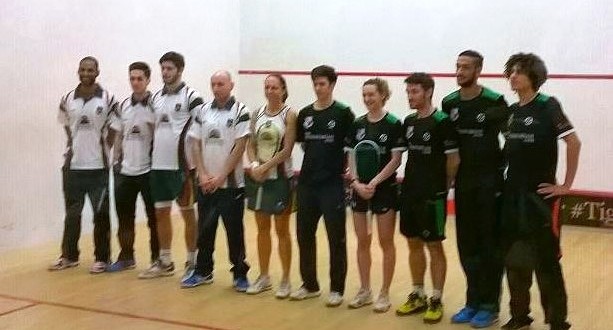 Duffield continued their impressive winning streak, and maintained their unbeaten record, as they beat Leicester 5-0. The scoreline does not reflect the closeness of the matches however, as there were a number of thrilling battles.

First on court 4 was Everards Leicester’s Tania Bailey against Duffield’s Millie Tomlinson. Tania got off to a flying start. Her better length allowed her to take control of the middle, and using impressive accuracy and great variety she hit a number of stellar winners into the front. She stormed the first 11-2. She continued in the same way at the start of the second. Controlling the T with well weighted tight drives, and finishing well. She took a strong lead, but Millie was now starting to find her length and the battle for the middle became more competitive.

Her improved length and a few errors from Tania helped Millie come back strong, and we were into a tie-breaker. Each of the players exchanged game ball after game ball as the momentum swung like a pendulum. Tania was starting to show the slightest sign of tiredness and this game all of a sudden looked crucial. Millie eventually took an epic game 18-16 on about her fourth game ball. That game seemed to take a lot out of Tania, as she was now looking quite fatigued, and Millie was seemingly getting stronger and faster.

Millie took the third 11-6. She continued to keep the pace high and the physicality of the game had now taken its toll on Tania. Millie took the fourth rather convincingly 11-1 and with It the match 3-1. Many people will wonder what might have been had that epic second game gone differently, but regardless a fine display from both players.

Meanwhile, on court 5, the number 1 strings were in action. Leicester’s Shaun Le Roux was up against Duffield’s Chris Simpson. Chris had recently played in the British Nationals reaching the semi finals before losing to Nick Matthew, while Shaun had recently reached a career high ranking of 39 in the world, so both players were on top form. Shaun started the better of the two. He was controlling the middle with authority, and volleying aggressively, keeping Chris buried in the back for the majority of the first game. He reached game ball at 10-8, but Chris would not lie down, and Shaun just clipped the top of the tin one too many times and Chris was able to sneak it 13-11.

Chris was now playing very impressively. His length improved and he was becoming clinical going in short, especially on the backhand side. He took the second 11-5 and Shaun had a mountain to climb.

The third was a topsy turvy game with both players exchanging leads. Chris went from 2-5 down to 8-6 up, only for Shaun then to reel off an incredible display of winning shots and take 5 consecutive points to win the game 11-8. The match seemed to have turned, and Shaun was now looking incredibly confident. He continued to hit winner after winner and took a commanding lead. He reached game ball at 10-5 and we looked all set for a fifth game. 10-5 was a big point. A great rally ended in a decision that seemed to rattle Shaun. 10-5 became 6-10. Then 7-10.

Before you knew it, Chris had managed to rattle off 7 consecutive points to win the game 12-10 and the match 3-1. A great match with the main difference being Chris’ impressively low error count.

Next on court 4 were the number 2 strings. Leicester’s Ben Coleman and Duffield’s Joel Hinds. On paper this looked like it would be the tightest affair with little between them in the rankings.

Ben started very well. Moving around the court very smoothly with great rhythm and efficiency, he took a very attritional first game 11-6. The second game continued like the first. Long testing rallies, where the players were fighting hard to hold the T. The match was becoming quite physical, with long rallies often ending in lets, and neither player wanting to concede their position.

Ben managed to sneak the second 12-10 to lead 2-0. The third game became slightly scrappier with more lets filtering in and a few more unforced errors. Joel managed to hold on to the lead this time and pinched a game back to make it 2-1. The match had gone on past the hour mark now, and the pace was still not letting up. The rallies continued to be very demanding physically with the question being who could last the longest. The game started to look crucial as Ben’s movement was looking less sprightly and Joel seemed to sense it. Joel took the fourth 11-9 in a very tense finish.

The writing now appeared to be on the wall, as Ben seemed to be struggling physically with a few different issues. His movement now significantly hampered, he finally succumbed 11-7 in the fifth, and Joel’s comeback was complete.

At the same time as this on court 5 the number 4 strings were on. Leicester’s James Bowden was taking on Duffield’s Andy Whipp. Andy started off at his usual relentless pace, and it took James a little while to adjust. Andy was hitting winners all over the court as he pounced across the T volleying everything he could.

He took the first 11-6. James got off to a better start in the second hitting some nice winners on the backhand side, but Andy then upped the pace again and made it very tough for James physically. He moved James around well with his trademark volley boasts and high cross court lobs which come back with ice on them. Andy took the second 11-5 to lead 2-0. He continued in the same way throughout the third. Attacking at will, and utilising great variety and change of pace. He won the third 11-7 to win 3-0.

Last of court 4 was Leicester’s own George Parker, undefeated so far this season, up against Duffield’s Declan James. The match started off steadily, and the players exchanged points back and forth, as they both looked to find their range.

Declan just squeezed the last two points to take the first 12-10. As the second game got underway it was clear to see the obvious clash of styles, with George playing very aggressively and expressive, and Declan more controlled and passive. George was trying to volley more now and really take the intiative, but a few unforced errors gave Declan game balls at 10-8. George quite bravely stuck to his guns however, and continued to attack aggressively even though he was game ball down, which he was rewarded with as he took four straight points to win 12-10 and make it 1-1. George seemed to switch off in the third. He made a number of unforced errors in succession and Declan took the game quickly 11-2.

George came back firing in the fourth though. He stepped up again and started volleying relentlessly with impressive precision and variety. He hit a number of breathtaking winners in a manner that seemed so instinctive it was inspiring to watch. He took the fourth 11-8. The fifth was a classic that had it all. The rallies became epic, with both players demonstrating incredible retrieving and each rally requiring a perfect shot to win it. Declan built a slender lead which he managed to hold onto to reach match ball. The final two rallies included the two shots of the night. The first came after George had hit two consecutive return of serves straight at Declan intentionally to try to catch him out, then on the third when Declan expected George to do the same he instead slammed it straight into the cross court nick.

George then fired his serve straight at Declan which he managed to quickly dodge, then returned the favour by slamming his own cross court nick in! The final game was 11-7 to Declan and a cracking match.

So the final score was 5-0 to Duffield. It was a harsh scoreline as there were a number of matches that could have possibly gone another way on another occasion, but Duffield were deserved winners and showed why they are still unbeaten this season. Leicester’s next opponents will be Nottingham away in three week’s time.

That will be another tough match, as Nottingham will have the playoffs in sight. Hope to see some of you over there! 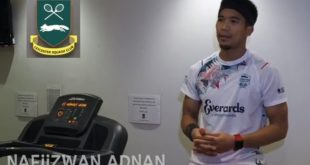 Leicester lost 4-1 at home to Birmingham Lions - here's the post-match interviews with the Leicester players ...