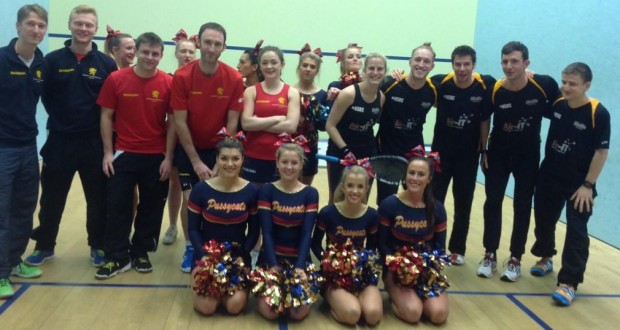 With the playoffs in sight, three teams were in tight contention for a chance to continue their campaign towards PSL victory. Air-IT Nottingham, arguably the strongest contenders of the trio, travelled to the Lion’s den this week to take on the Birmingham based team.

A convincing victory for Nottingham would see them rocket to second in the league table going into the final two fixtures, and world number 15 Emma Beddoes set the team on track to achieve just that with a comprehensive 3-0 victory over Birmingham’s Katrina Burrows. In a relentless demonstration of dominating squash, the commonwealth medalist’s superior class shone through throughout, and Burrows simply could not find an answer.

After taking a 1-0 advantage in the 4th string match, Ollie Holland of Nottingham appeared to be feeling the effects of a tight first game, and was visibly tiring. A string of errors from Birmingham’s Jonny Harford let Nottingham’s world number 151 back into the second game, but despite recovering from a 7-2 deficit to force a tiebreak, Holland was unable to find the finishing shot to secure the game. The mental blow of losing a close second game took its toll on the younger player, and Harford ran away with the third.

Stepping back on court after the two minute break, Holland knew that it was now or never. He came at his elder opponent with everything he had, but despite earning two game balls, the tenacity of Harford saw him win the third tie-break of the match, and take the tie for the Lions.

Despite 78 world ranking positions separating Nottingham’s Eddie Charlton and Birmingham’s Joel Makin, their last encounter was a close 3-1, and Charlton was not going to underestimate his younger opponent, especially on his home courts. In a first game characterised by long testing rallies, Birmingham’s world number 129 was the first to advance to a game ball advantage, but after walking off court thinking he’d won on an attempted cross court nick, Joel’s concentration slipped and he soon found himself 1-0 down. Charlton tightened the screw in the second, taking ball short with precision, however the tallies remained physical, and despite five game balls. Makin levelled the match on his first opportunity.

The pair then exchanged the next two games, but in the decider, more creative racket work from Charlton and the injection of some brutal rallies finally broke Makin’s machine like retrieving skills, and the Nottingham favourite took the win.

The third string encounter saw a clash of two of the grittiest players of the professional squash world. First blood went to Mark Fuller of Nottingham, who always seemed that bit faster and further up court than his Birmingham opponent, world number 265 Chris Hall. In the second game, Fuller continued to inject pace and impose pressure on his opponent, stretching his lead to two games. As he stepped on court for the third time, Fuller appeared to have the bit between his teeth.

Where Hall was beginning to stall, the higher ranked Nottingham player seemed only to get faster. An early lead from Fuller, and predictions from the crowd that this match was all but over, was responded to with an impressive comeback from Hall, who saved one match ball and recovered to take the game 12-10. Fuller was not going to let his lead slip any further, however. He refocussed and took the final game to complete a 3-1 victory over the Birmingham Lion.

Despite the win for Nottingham being secured before the top strings stepped on to court. Nottingham’s number one player, Scotsman Alan Clyne, knew that every point the team could earn today would be vital in their push to make the playoffs for the season. ‘Clyney’ saw off a valiant challenge from Birmingham’s Chris Ryder, and ultimately completed a professional 3-0 victory over the Lion.

A comprehensive victory for Air-IT Nottingham this week in a potentially very tough encounter with the Birmingham Lions has bolstered the team’s chances of making the playoffs for the first time since the 2011/12 season.

The next round will see them in a home encounter against Premier League newcomers, Everards Leicester.

Previous R8: Leicester welcome the Invincibles
Next R8: Surrey back to form