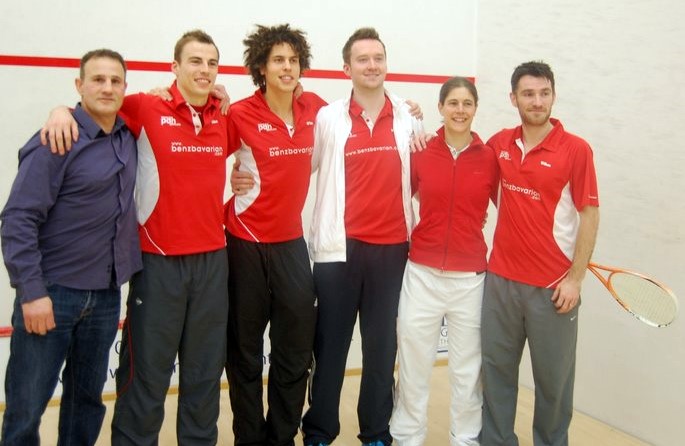 Round 7: Duffield brush Birmingham aside

First match up on the main court tonight saw Duffield’s unbeaten stalwart Andy Whipp take on Birmingham’s Jonny Harford. Jonny started a little the brighter and, with the aid of two tins from Andy moved into a 7/2 lead. In attempting a boast off the rear wall Andy banged his left knee against the glass wall but far from it interfering with his game it somehow livened him up and he pulled back to lead at 8/7.

Then the game got really serious. Jonny took back the lead at 9/8, then put the ball out of court for Andy to level at 9/9, but Jonny got to game ball first at 10/9, whereupon Andy levelled again and took match ball himself with a stroke against Jonny, 11/10. Jonny levelled again and took game ball again at 12/11, and again at 13/12, but Andy with his usual never say die attitude pulled it back and took the game 15/13. What a great game to start the evening off with. Jonny took the first two points of the second game but with a wonderful array of shots and non-stop running Andy took complete control to take the game 11/2.

In the third game it looked like a possible comeback from Jonny, taking an early 6/2 lead, but once again Andy fought back magnificently to lead 9/6 and after Jonny took another two points Andy finished the game off at 11/8, and the match 3 – 0.

On the adjacent court Laurence Delasaux, making a return to the Duffield team, faced a young Birmingham debutant in Nathan Lake, and he quickly showed his experience to take the first game 11/2. In the second Laurence eased out to a slight lead at 6/5 with young Nathan fighting hard, and he then fought even harder to pull the game round and win 11/7.

In the third Nathan this time took a slight lead but from 7/5 up he then let it all slip for Laurence to take the game 11/7. In the fourth Laurence raced into a 10/3 lead, and though Nathan managed to save three match balls Laurence finished the game off at 11/6 and the match 3 – 1.

The second game between the No 2 strings Joel Hinds for Duffield and Jamie Haycocks looked at the start as though it could be an upset for Duffield as Jamie quite comfortably took the first game 11/4, and then took a slight lead in the second at 6/4. However Joel then started to show how only he can play and took the game 11/6.

He then took a 6/3 lead in the third, Jamie levelled to 6/6, but could do little in stopping Joel taking the game 11/8. Joel again took the lead in the fourth 5/2 and although Jamie played some lovely squash to get back into the match, Joel took the game 11/8 and the match 3 – 1.

Again on the adjacent court Duffield Laura Hill started comfortably taking the first two games 11/4 and 11/8 against her opponent, Welsh player Deon Saffery. However, with this match having been put back slightly because Laura had only just made it into the club directly from a shift at her fulltime job as a firefighter, Laura then started to visibly tire and Deon took advantage of this to take the next two games 11/3 and 11/7.

The final game turned into a real thriller, with Laura taking a 5/1 then a 6/3 lead, Deon pulling back to lead 7/6 then both girls playing point for point until Deon got match ball at 10/9, Laura levelled at 10/10 but Deon was just the stronger to serve out to take the game 12/10 and the match 3 – 2.

The first string match back on the main court brought Duffield’s favourite man, World No 1 player, World Champion, and once again the National Champion, Nick Matthew, to play Birmingham’s Chris Ryder. Although Chris played his part in what was a very good match Nick showed all the attributes which has made him a Champion and took the match 11/5, 11/7, 11/3 in 27 minutes.

A great win for Duffield which, although not yet mathematically certain, puts them very much in the driving seat to take the winner’s spot in Group A.

Previous Duffield Almost Home – With Three PSL Rounds To Go!
Next It’s all away again as Nottingham dent Duffield