The world’s most prestigious squash league starts its 31st season on Tuesday 21st October when the 2014/15 season of the Premier Squash League (PSL), supported by Dunlop, gets under with the first of ten rounds of League matches.

There will once more be twelve teams from around the UK competing for the title, newcomers EverardsLeicester replacing Chapel Allerton in an otherwise unchanged lineup of teams which between them boast 11 of the PSA top twenty and five of the WSA top ten players.

Leicester will compete in the primarily Northern Division A, and are at home to Yorkshire outfit Pontefractin their opening fixture, although their signature signing, world #9 Daryl Selby, is unavailable for the first match.

Four-time champions Benz Bavarian Duffield, who lost out in last year’s final, welcome neighbours Air IT Nottingham while Coolhurst London will start their second PSL season with a home match against the renamed Birmingham Lions.

In Division B six time and reigning champions Virgin Active Surrey HRC start with a home match againstUWE/Elite Bristol. Having added new world #1 Mohamed Elshorbagy to their lineup, Exeter Diamondsare expecting to challenge for the title, and will be fielding their new number one at home to Luxford/9 Group St George’s Hill, who are once again relying on mainly home grown talent. To complete the fixtures Team Chichester meet Winchester Racquets & Fitness.

England Squash & Racketball Head of Competitions and Events Chris Nutley said: “I am delighted that Leicester have agreed to join the league allowing us to field a full complement of teams once again.

“With all team squads now confirmed we can look forward to another exciting season of PSL and I wish all teams an enjoyable and successful season.”

It’s a busy start to the season with the first three rounds to be played on consecutive weeks – 21st Oct, 28th Oct and 3rd Nov. 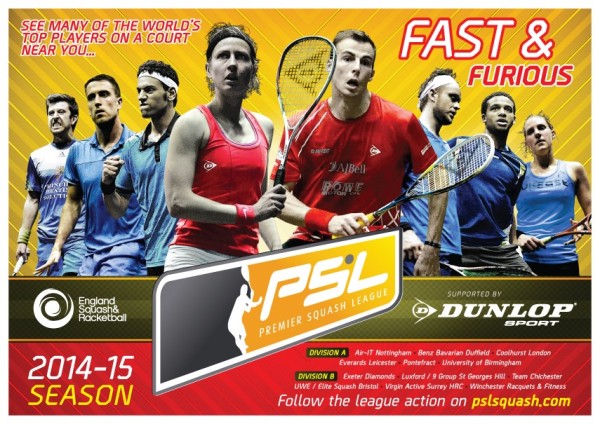