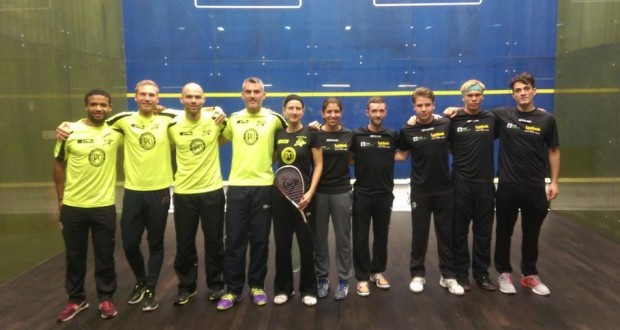 Before we’ve even had a chance to catch our breath from last week, round two is upon us already… and it was a nail biter ladies and gentlemen. The PSL crystal ball predicted a 3-2 and a 3-2 it was. Of course, it was always going to be a close one when Surrey plays arch rivals, St George’s. St George’s had the home advantage, but on the night, it wasn’t quite enough to seal the win.

The first match on the glass saw Alison Waters take on 18-year-old Egyptian, Yathreb Adel. Adel recently despatched Annie Au at the U.S Open in Philadelphia in straight games to claim her first quarter-final spot in a WSA World Series event. Fresh from that notable success, it was definitely a match worth watching for the crowd at St George’s. Adel made a strong start in the opening game but Waters quickly asserted control. Adel’s superb movement and fluidity around the court proved a difficult obstacle for Waters. Adel was able to maintain some of the pressure in the second but by the third game Waters showed her class and experience and stepped it up a gear. It was neck-and-neck at the start. Waters opened up a lead to 5-3 in the third and after Adel hit some excellent shots, including a fantastic low kill that sent Waters scurrying to the back at 4-6, Waters simply pushed on and moved Adel around the court masterfully. Adel could only cling on in the closing points of the game before Waters finished off her young rival to close the third out 11-5.

Without doubt, the award for man of the match had to go to Ben “The Silver Fox” Ford whose tussle with St George’s, Alex Ingham proved to be the match that ultimately averted disaster for Surrey. It also made for an interesting match because it pitted former coach (Ford) against former pupil (Ingham). From the start it looked like it was all she wrote for Ford after Ingham surged ahead in the first two games taking it 11-8 and 11-6, respectively with Ford seemingly unable to counter his opponent’s attacks to the front. However, it seems that the lessons weren’t quite finished for Ingham because Ford dug in and slowly turned the tide on his opponent. As fatigue started to hit Ingham, Ford clawed his way back by frustrating his opponent with some longer rallies and tight, controlled squash.

By the fourth, Ingham was clearly tiring quickly and at something of a loss to know how to shift the momentum back. After winning the fourth 11-4, Ford pressed on and his perseverance in the fifth paid off despite Ingham’s last ditch attempt to fight off his opponent. Ford clinched the fifth 11-8 and the crowd roared with delight.

Reflecting on the match afterwards, Ford felt that: “It was a slow start to say the least and he played really well in the first game and was dictating the whole match and I was very slow moving forwards. In the first two games, I kept putting the ball on his racket…which didn’t help! So I kept going crosscourt to my forehand and he just kept volleying it, so every time I went crosscourt, he won the rally. I then started to straighten it up and put it on my forehand (his backhand) and he wasn’t as effective. By the third, he seemed to hit a wall physically and I could tell straight away that he was struggling physically, which obviously gave me a little bit of confidence.

From then on, even though it was still tight, I felt like I had control of the match to some extent and just managed to close it out in the end. I got a bit of good advice from Adrian [Grant] and Tim [Garner] between games but other than that, I think it was more of a physical thing, which is not normally the case as it’s usually the other way around! I’m not sure whether there was something wrong with him but he just seemed to run out of steam very quickly”.

Finnish player, Mustonen was quick out of the blocks for his encounter with Danish number 1, Kristian Frost Olesen. Certainly Mustonen seemed determined to set his stall out from the start because he raced ahead and quickly accumulated a comfortable lead. Mustonen appeared to control the pace of the rallies, slowing things right down but injecting the pace when he needed to. This approach seemed to disorientate Frost after Mustonen swept up the first 11-2.

Mustonen’s confidence seemed to be riding high in the second because he played some magnificent squash and found nick after nick, much to his opponent’s frustration. Mustonen steamed ahead to 4-0, again with a beautiful drop that rolled out of the front left of the court. Frost started to edge a comeback in the second but it seemed clear that Mustonen was on fire as Frost then hit a mixture of errors and strokes. Mustonen pushed up to 9-4 with a superb length that faded into the back. Mustonen then finished up on a brilliant volley crosscourt nick to take the second 11-4. In the third, a visibly despondent Frost shouted with frustration at 1-3 down. The frustration clearly being that Frost wasn’t playing badly, it was just that Mustonen was in masterful form.

At 5-2 Mustonen hit a powerful, low kill to the back. Again, Frost tried to stage a comeback, picking up a few points to gain parity with Mustonen at 5-5. Frost then managed to open up a lead to 7-5 by digging in with some real grit and determination. After a let decision that clearly displeased Frost, he managed to go to 8-5 with a superbly weighted length. By this point, Mustonen appeared to be losing focus but clearly spotted what was happening and gained points by reasserting control of a slower paced game with sporadic hard shots that unbalance Frost.

From 9-8, Mustonen goes to 10-8 and after a great volley drop, Frost tins giving Mustonen a well-deserved victory.

This was Schweertman’s second outing for Surrey and this week he faced the rising talent of Charles Sharpes, a tough opponent some 20 places above Schweertman in the rankings. This was a fast-paced match with Schweertman managing to stay with Sharpes and take a lead in the first before Sharpe’s pressure forced a number of errors from Schweertman losing the first 7-11. A series of hard, low kills and speed around the court gave Sharpes the ascendancy in the second. The third could well have taken the match in a different direction because Schweertman looked strong and Sharpes seemed to go in and out of focus. However, Sharpes then reasserted himself and despite Schweertman’s efforts after the tie at 10-10, he eventually succumbed to Sharpes 12-14.

Speaking about playing his second match for Surrey, Schweertman said: “It was less good than last week. The first game was actually alright. I was leading and made some errors. There were a couple of big points but I made the errors. I started playing better and although I wasn’t leading like the first game, it was equal at 6-6 and then he had a couple of points that were good. The third was probably the best for me. He made some mistakes. I’m not sure if he was tired or maybe the balls I hit were a bit better.

It was a shame I didn’t start as I did in the first – that would have been better. His forehand was definitely a strong point for him and he hit a lot of points from there: crosscourt nicks, straight kills. That was definitely one of his strong points that I will remember for next time and one of the main reasons why he won the match”.

After coming back from an injury, this was always going to be a test for Grant. Lee, a formidable talent that is steadily working his way up the rankings was clearly also equal to the challenge. It was apparent that there was a great deal of mutual respect on court, which added to quality of this match. Grant took an early lead in the first game to 4-1. Lee managed to pull a string of points back to 6-6 and then took the lead to 9-7 with a beautiful low drop from the back that seemed to just go dead weight in the front of the court. Grant then picked up the pace somewhat to get to 10-9. After Grant then put one out of court, the game could have been anyone’s at 10-10. Grant however continued with the pace and Lee tinned giving Grant the game at 12-10.

In the second Lee appeared to change his tactic and introduced lots of height that kept pushing Grant further and further back. Grant stayed with him point-for-point all the way up to 8-8. Grant took the second game 11-8 with a volley-drop with Lee conceding his pick-up. In the third game, the tempo pattern of paly continued with each player being neck-and-neck all the way. At 5-8 Lee hit a sublime drop to the front left of the court before then picking up a stroke point. Grant then took control once more. With the home crowd cheering Lee on, it could well have gone to a fourth game at 9-9 but Grant had the final say on matters.

Speaking about the result of the match, Grant had this to say: “It wasn’t something that I expected from a personal point of view because it was my first match back after injury – I tore my calf at the U.S. Open and that was my first game back since then. I did a bit of training leading up to it but I didn’t know if I was on course because you just don’t know where you’re at. I pushed hard, tested my calf and had no reaction. I was hitting the ball well and was probably more conscious of hitting the ball well.

To get off 3-0 against anyone at this level is satisfactory, particularly to get a win for Virgin, which is more important. He [Joe] kept with me point-for-point and I guess it was my experience in the bigger rallies that enabled me to push hard. I felt like I was pushing too hard at one point and had to back off a bit so of course he came back. It was as much about working out where I was physically since being off for the last three and a half weeks. I’m happy and if I can achieve that in a couple more tournaments for this part of the season.

Now that I came out of that match unscathed, I’m going to Nigeria next week for a £25,000 event where I’m the number one seed. This was a marker for me. This game is so much about confidence and if you’re not confident physically or with your hitting, it will show and I cleared that out of my head today”.

In reaction to the match, Surrey manager, Pete Smith said that: “It was very good win. I knew it would be a tight match and I knew Ben Ford’s match would be pivotal to it, so he did really well to win that. Obviously Adrian Grant and Alison Waters were solid and we had a professional win away from home”. 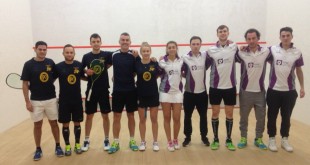