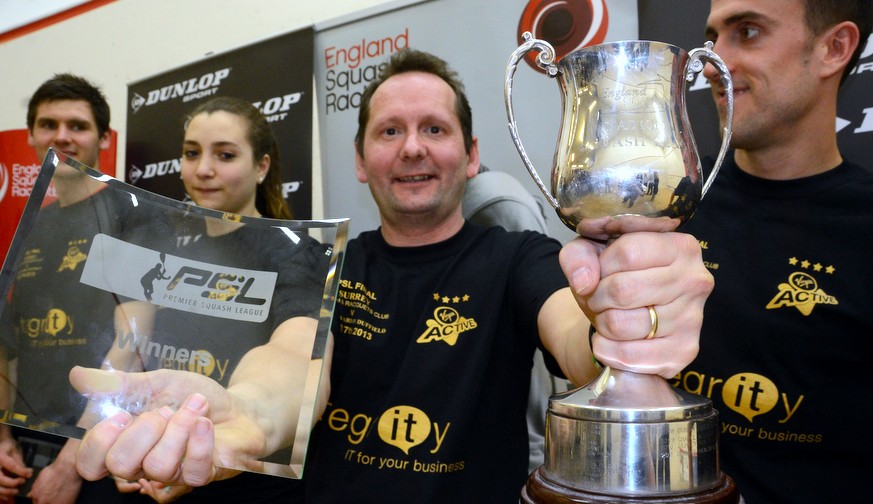 It was a dramatic climax to the 2012/13 season of the world’s most prestigious squash league, supported by Dunlop, which hinged on the final match on the Nottingham Squash Club showcourt between the two clubs’ second strings Adrian Grant and Karim Ali Fathi.

England’s world No2 Laura Massaro had given three-time champions Duffield an early lead with a straight games win overNada Elkalaawy, a 17-year-old from Cheam in Surrey who was a late replacement for Surrey Health’s Alison Waters – the world No4 from London who, with Massaro, had helped England to victory in the European Team Championships at the weekend in Amsterdam.

Impressive wins by Egyptian Karim Abdel Gawad and British U23 Champion Adrian Waller put Surrey Health in front – but the Derbyshire club’s other world No2 Nick Matthew, the two-time world champion from Sheffield, brought Duffield back into contention with an 11-8, 11-9, 11-4 win over his England team-mate Peter Barker.

“It wasn’t the best match for either of us tonight,” admitted Yorkshireman Matthew when interviewed courtside afterwards. “But I did what I had to do tonight.”

The win not only extended Matthew’s own unbeaten PSL record for Duffield to 34 matches – but also set up a decider!

The clash between English international Grant, the 32-year-old world No22 from London making his third successive PSL final appearance for Surrey Health, and rising Egyptian star Fathi, the 19-year-old world No43 from Cairo, was the pair’s first meeting.

Pre-match gossip suggested that the Egyptian teenager was nursing a hamstring injury and had been out of action for the previous two months. However, the youngster delighted the packed crowd with his trademark Egyptian shot-making and led in both the first two games.

But Grant’s experience and match fitness ultimately shone through as he stormed to a title-winning 11-7, 11-9, 11-3 victory after 37 minutes.

“I’d heard he had an injury, and I was thinking of that too much in the first game,” admitted Grant later. “But it’s been a massive team effort this season – it’s a great achievement.

At the trophy presentations, the club’s top string Peter Barker paid tribute to Surrey Health’s team manager Pete Smith: “The fifth title is pretty special – but this is for you Pete,” said the world No7 from London. “He puts his heart and soul into the team and we are all indebted to what he does.”

Barker also paid tribute to opponents Duffield, champions in 1998, 2006 and 2007. “It’s a long time since we’ve played such tough opponents. They will be worthy winners  one day!”

Smith was understandably delighted with his team’s performance: “To win the title five times – and four times in a row – is pretty magnificent. The team spirit is so good.

“Nights like this are amazing for squash – just what we need as we work towards getting the sport into the Olympic Games in 2020.”

Integrity Surrey Health & Rackets retained their PSL title tonight at Nottingham, but it went to the deciding tie as Duffield pushed them all the way ...