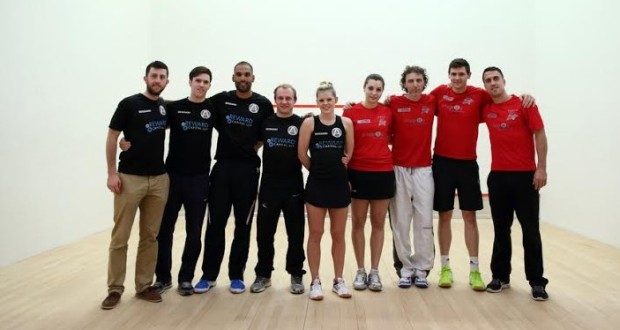 Surrey & Duffield to meet again in the Final

Defending champions Integrity Surrey Health & Racquets and Benz-Bavarian Duffield will contest the Premier Squash League final for the second season in a row after claiming decisive victories in tonight’s semi-finals of the world’s most prestigious squash league. 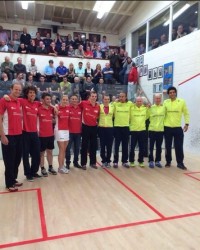 In the final match of the night between Essex and England team-mates Peter Barker and Daryl Selby, it was world No7 Barker who delighted the home crowd with a 9-11, 11-6, 11-8, 11-7 victory which produced the 4/1 result which takes Surrey Health into their sixth final since 2008, and their fifth in a row!!

“It doesn’t get any easier,” said Pete Smith, the Surrey Health team manager who has led his club to five titles since 2008. “Everybody wants to beat you!

“Tonight’s tie had the potential to be close – but we got off to a good start and got the win after the first three matches. The team played well – and Nada was exceptional. This was only her third match for us and she’s still only 18!

“I’m pleased for the team – it gets harder every year, but the team spirit is fantastic.”

In Derbyshire, Duffield took full advantage of their historic presentation of two world champions when the first, Laura Massaro, put the home side into the lead over Exeter Diamonds with a 3/0 win over Victoria Temple Murray. The home crowd were treated to quick wins by Andy Whipp and Joel Hinds to seal victory for the three-time former champions – and later South African Stephen Coppinger made it 4/0 with a four-game win over Finnish champion Olli Tuominen.

But arguably the best was saved to last for the capacity crowd at Duffield when club stalwart Nick Matthew, the reigning men’s world squash champion from Sheffield  who is celebrating his 11th successive season for the team, stormed to an 11-7, 11-6, 11-9 win over Egypt’s world No13 Omar Mosaad.

The victory not only give his side a triumphant 5/0 whitewash, but also notched up Matthew’s 40th match win in a row – a PSL record!

The conclusion to Duffield’s 21st successive season in the league – itself a PSL record – takes the team into its seventh final since 1995.

“I couldn’t have asked more from the team tonight,” said a delighted Duffield team manager Felix Frixou. “I’m very happy with the result – 5/0 was more than I could have hoped for.

“There was a great atmosphere in the club tonight and we did what we had to do. We’re ready for a repeat battle with Surrey Health – and we’re looking forward to it!”

Matthew was also proud of the outcome, but keen to pay tribute to the team’s strength in depth over the season. “After all the talk about the team’s two world champions, it was great for Laura and I to actually play alongside each other tonight – but it’s a testament to the strength of the squad that the team has reached this far even though we haven’t played all the matches this season.

“It’s such a great set-up here at Duffield – it’s a very special club – and this success is down to Felix’s great leadership, and before him Brian Hargrave.”

Matthew was also keen to highlight the significance of team’s semi-final kit colours: “I insisted we played in red tonight as this was the team colour we used when we won the titles in 2006 and 2007,” said the Yorkshireman.

“It certainly paid off tonight and we will definitely be in red for the final!”