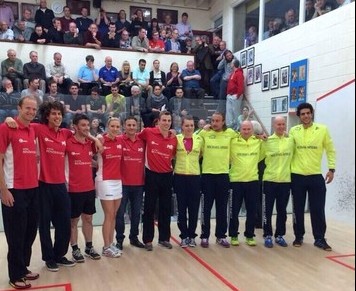 It was standing room only last night at Surrey Health & Racquets as eager squash enthusiasts arrived early to ensure that they bagged themselves a seat for their home, semi-finals stand-off against Chapel Allerton.

Rising star, Adrian Waller and South African born Shaun Le Roux kicked things off for the 3rd string encounter. La Roux was quick off the blocks in the first game and his positive play coupled with low, attacking drives saw him go point-for-point with Waller, who struggled to contain his opponent. After drawing level at 9-all, a sublime cross court drop saw La Roux edge forward to 10-9. Waller pulled one back after a stroke point was awarded but La Roux maintained his focus, eventually closing the game out at 12-10 with a beautiful crosscourt nick.

After a slightly shaky first game, Waller returned to court for the second game looking to respond accordingly to La Roux, and respond he did.  The second game saw Waller tighten his play up considerably, forcing more errors from La Roux. La Roux’s positive play from the first game seemed to be fading fast. Waller led at 7-4 after a low crosscourt kill and although La Roux managed to pull a few points back to get to 7-9, it was Waller who continued to dominate the second game. Waller then took the game at 11-7 with a mesmerising lob.

In the third, La Roux took an early lead at 4-1. However, despite his attempts to reassert himself, Waller soon closed out his lead at 4-all with sustained, controlled pressure. In something of a see-saw game, La Roux then resurged to get himself back 10-10 with an exquisite drop. It was Waller however that maintained his dominance on the game culminating in La Roux tinning to give Waller the third game at 12-10.

The fourth continued in a similar vein but it became increasingly evident that La Roux was fading fast against Waller’s relentless pressure and accurate squash. After a fantastic double nick at 8-4 from Waller, La Roux looked gone. Although La Roux then secured another 2 points, it was Waller that eventually called an end to proceedings with La Roux out for the count at 11-6.

Speaking afterwards, Waller described it as “a tough match, the start was fast, frantic and I had to play my way into it and get back the control. From there on, the second, third and fourth games were all tight but I felt a lot more comfortable and managed to win the crucial points… once I started getting back into the rallies a bit more, that took away his away his attacking play that he used in the first and it became a little bit more cat and mouse… ”. Speaking about what he enjoyed about playing for Surrey Health & Racquets, Waller said that he had “played here since I was a junior, when they put their faith in me… and that has continued ever since.  In relation to Waller’s rise up through the rankings (current WR 26) and how he felt about the current crop of British players passing the baton on to players like himself, Waller felt that “it is exciting but it will be hard to fill their shoes with the success that they’ve had… but I hope to be able to take that challenge on when it comes around and just want to enjoy it and embrace it rather than fearing it”. Waller went on to say that ‘with all the successes of players like Nick, Pete, Daryl  it would be a massive ask to top their achievements so my approach is simply to do my best to try and emulate them’ .

Meanwhile on the neighbouring court, the girls under 19 English junior champion, Nada El Kallaway put in a dazzling performance against Chapel Allerton’s Carrie Ramsey. Egyptian born Nada took an 11-3 win in the first game followed by a more closely contested second game. The third saw Carrie pull a game back at 11-9 but Nada’s intelligent, well-crafted squash led her to victory at 11-6 in the fourth much to the delight of the Surrey H&R crowd.

Next up was the second string match between home favourite, Adrian Grant and Chapel Allerton’s, Guernsey born rising star, Chris Simpson. Simpson took an early lead in the first playing tight, error-free squash. There were some early discussions with the referee that appeared to make the play a bit patchy but Simpson seemed to maintain his momentum winning the first 11-5.

In the second, Simpson really seemed to find his range and maintained pressure on Grant with some superb length and width. Although Grant attempted to stage a comeback, drawing on his significant experience and tremendous racquet control, Simpson proved just too consistent. The third followed in a similar fashion and although the left-handed Londoner’s play asked some questions of Simpson, it was ultimately not enough to keep him in the game and Simpson closed it out at 11-4.

Speaking afterwards, Grant revealed that he’d just got back from Canada after reaching the semi-finals in Canada at the North Ontario Championships where he sustained a hip injury after slipping on some sweat but felt that “Chris played well and he could see that I was struggling with my movement and that I wasn’t at my strongest or fastest”.  In relation to what makes Chris a tough opponent, Grant felt that “… amongst the English guys, we know each other’s games really well… so it’s always tempting to try and come up with something unusual that is not in your normal repertoire… it is always going to be tough playing any of the English guys because we train together and play each other on PSA around the world so we know what to expect and always try to put on a spectacle for the crowd”.

Asked what Grant enjoyed about playing for Surrey H&R, Grant felt that “It’s the crowd really, all the players get on with the crowd, we’re not a team that just plays and leaves, we hang around and socialise with the members and we know them really well. With the characters in the club, it makes it very sociable and that creates a good synergy that helps carry us and enables us to win”.

It was also crowd favourite, Davide Bianchetti’s turn to take to the court against James Earles. Although the eventual score line may not have reflected it, the match was closely contested and pitted the relative youth and speed of Earles against Bianchetti’s seasoned experience. Earles matched Bianchetti all the way in the first and it appeared that it was Bianchetti’s grounded experience that edged him past Earles at 11-8. This was also the case in the second game where it could arguably have been anyone’s game but Bianchetti  was the eventual victor with Earles succumbing to his unrelenting pressure. Bianchetti then marched on to take the third game 11-5.

With the overall scores at 3-1, the last game of the night turned out to be a dead rubber, thus alleviating the pressure on Surrey H&R stalwart, Pete Barker who was up against Daryl Selby for the first string match. With the win already in the bag for Surrey, this match proved to be a superb finish to the night with both players treating the crowd to some amazing squash. The absence of any team pressure seemed to generate much more attacking squash from both players and kept things neck and neck. Both Barker and Selby shone throughout the first with Selby eventually getting first blood at 11-9. In the second, Selby managed a small lead at 2-0 with a well-crafted drop shot before Barker drew level at 2-all. Barker then seemed to step up a gear but with both players firing in their attacks to outdo each other. Barker maintained the pressure and took the second 11-6. The third followed suit and again Barker edged it at 11-8. By the mid-way point, the fourth looked like it might be another neck and neck affair but Barker pushed on, finishing the match up with a series of straight, tight drop shots. Ultimately it seemed that Barker appeared to have the edge on the night after a brutal, low backhand drive clinched victory for him.

Following the match, Barker commented that ‘although the tide was over… it was a team effort and although we won pretty comfortably, there was some pretty close matches even if the scores might not have represented that. To get into the final again is great for the club and we’ve been lucky enough to be a part of that for the last 7 years and have won the last 5 years’.  Asked about what makes Selby a difficult opponent, Barker commented that “normally, Daryl is normally a very economic mover but I think he was carrying a slight niggle… but if you give Daryl anything loose on his racquet, he can cause you problems. I was trying to keep the ball in the right areas of the court and close to the wall and trying to make it tough for him. Obviously I knew that physically he was a little bit short so was trying to make the rallies nice and hard and ask a few question s that way as well.

In response to what Barker enjoys about playing for Surrey H&R, Barker said that “it’s fairly local to me, I live in Chingford, Essex so it is about an hour away for me… I’ve known the Captain of the team, Pete Smith for many years and played Surrey Cup as a youngster and graduated to PSL and it is a friendly club. I also have a Virgin club near where I live and train and because they are dotted all around the country and so for example, I had an exhibition match up in Tring and wanted to miss the traffic and went to one of the Virgins there to do a session, go in the pool etc before going to the exhibition.

Speaking at the end of the night, Pete Smith, Surrey H&R captain said that: Tonight’s semi-final was a close encounter even though we managed to secure the win fairly early with wins by Nada, Adrian and Davide. Nada played exceptionally well for someone so young and you could see she has gained the experience and confidence from playing PSL squash. The crowd were excellent on the night supporting the team and the players responded to that magnificently. Pete and Daryl ended the evening off superbly for the crowd with a really entertaining match.

This year has been hard and challenging  we have had many very competitive matches so it’s a real credit to our whole squad that we have again managed to reach the PSL final…roll on May 6th.

Surrey Health & Racquets beat Chapel Allerton 4 matches to 1 and will now meet rivals, Duffield for the final, the location of which to be announced shortly.

We're down to the last four, here's the semi-final lineups and preview ...