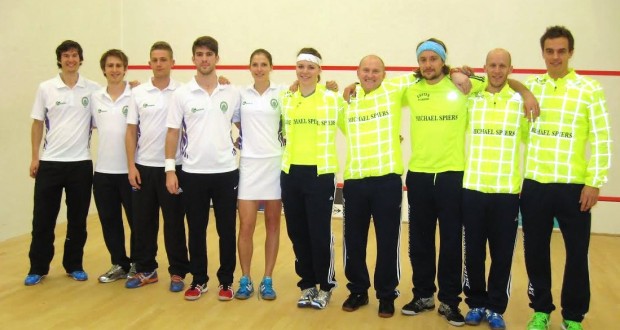 Team Chichester’s final match of the first half of the season was played on Tuesday evening against unbeaten and current league leaders, Exeter Diamonds. The Crystal Ball predicted a 2.3 win for Exeter and the match promised to be the most exciting encounter in this season’s campaign for Team Chichester thus far.

The match could, however, go either way.

Former Chichester squad player, Tim Vail, was first on court in a much anticipated meeting between coach Vail and pupil Olly Pett [Chichester]. Pett was out of the blocks very quickly and he stormed to a 1.0 lead by taking the first 11/3. From that moment onwards Pett was always one step ahead and he did not allow Vail in to the match. Pett, with great conviction, took the next two games 11/ 7, 11/8 to take victory in 29 minutes and end Vail’s unbeaten record this season.

Robbie Temple, meanwhile, started slowly on the adjacent court in his match against Joey Barrington and ultimately lost the first game 2/11. The second game was even up to the midway point when Barrington pulled ahead to take a 7/10 lead. Temple stubbornly dug in and took the game on a tie-break – 13/11. The next two games were very competitive with a great blend of power, speed and touch from both players. It was Temple who came through in both games [11/9, 11/8] to put Team Chichester 2.0 up on the night.

Jackie Kemp (Chichester) played Tory Temple-Murray; a repeat of Sunday’s Ladies’ BSPA Boston Open final in which Jackie was the 3.1 victor. This time she took the match 3.0 with competitive first and second games and then played with confidence in the third to put Chichester 3.0 up and end Exeter’s unbeaten run.

Rex Hedrick was, as expected, having a fantastic attritional game with Exeter’s Olli Tuomenin [FIN]. There was some amazing retrieving from both players. Tuomenin took the first two games before Hedrick struck back to take the third. Tuominen began to look tired in the fourth but he had just enough left to keep Exeter on the score sheet with a 1.3 victory.

The final match was between the number one strings, Chichester’s Jon Kemp and Exeter’s WR18, Lauren Jan Anjema [NED]. Anjema played a very straight game and solid down the right hand wall; Kemp was not given too many angles to play. Anjema took the first two games 4/11, 9/11. Kemp struck back in the third and finished the game off 11/9 with some of his trade mark nicks. In the fourth Anjema once again applied the pressure, as he had done in the first two games, and opened up an early lead. He closed the game and match 6/11.

A spectacular 3.2 win for Team Chichester and after a 3 wins and 2 losses in the first half of the season it is still very close for the play-offs. The squad now takes a break for Christmas and the team will regroup and will be ready for a competitive second half in the New Year.