Team Talk – what’s (been) going on

What’s been going on in the close season, and prospects for the new one – updates from the teams:

It seems almost a lifetime away since that nailbiting end to the 2014/15 season when Benz Bavarian Duffield, against all odds won through on Election night last May.

With the coming season just days away we have every intention of defending our PSL title and taking back to back titles. We have a new title sponsor for 2015/2016 in Marstons Brewery, and are able to field the same strong squad we had last year with the addition of young Jess Davis on the girls side.

Our first home match on the 6th of October will be a very close affair as both sides will be fairly evenly matched so the Duffield faithful will no doubt be treated to another nailbiting evening of top class professional squash.

Nottingham remain unchanged for a third year running. It will be a tough fight to get to the playoffs, all the sides in Group A look strong but as a team we are really looking forward to the challenge. 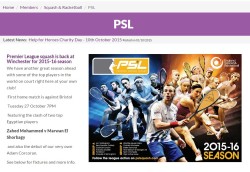 We’re also delighted to have a bunch of junior internationals in the squad this year including Gina Kennedy, Robbie Keefe, Adam Corcoran and Jasmine Hutton, all looking to make their mark on the professional game.  Thanks to the new sponsors for this year, Guillaime Vappereau Hair, ClubNet, Country Oak Buildings and University of Winchester.

Plan for this season?  To make it our most successful season so far.

Everards’ Leicester has high hopes for the new season and will be looking for a play-off place in only their second year in the PSL.

The core of the squad will be familiar to most with Daryl Selby spearheading the team at 1, and of course Leicester local George Parker continues to move up the rankings after securing his first ever PSA title in Barcelona in September.

The squad has strength in depth with new recruits Nafiizwan Adnan and Angus Gilliams; and there is a new look to the ladies line-up as the team welcomes Emily Whitlock and Coline Aumard to the squad. We’re expecting some fantastic matches, and some excellent results. 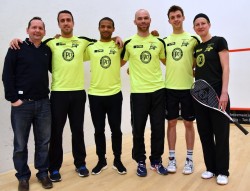 Like last season we hope to once again be competitive in the league and will look forward to getting stuck into what looks on paper like some exciting fixtures and potentially some interesting head to head match ups.  We are anticipating the matches to be tougher than ever with other teams also seemingly strengthening their squads, and we can’t wait for the matches to get started!’

Our changes this season are the signing of Fiona Moverley to replace Sarah Kippax – who is absent on babysitting duties – and the rising star Patrick Rooney who will hopefully play regularly for us. 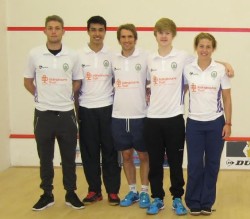 Team Chichester has a new line-up this season. Rex Hedrick, who played for the team for the last two seasons, has now returned to Australia.

Two new signings have been made; Matt Hopkin from Australia and Paul Coll from New Zealand. Matt is from Brisbane and is currently ranked 114 in the world, Paul is world ranked 41 and winner of the Australian Open [Aug 2015]. Paul is based in the Netherlands and hopes to play for Team Chichester in as many ties as possible.

Kyle Finch [16 years of age] will be taking a more active part in the team’s line up. He recently reached the semi-finals in his first professional event – The Belfast Open. Since he will remain U21 for several years the team hopes to retain his services for many years to come. Adrian Waller [WR26] and Nathan Lake [WR116] return for a second season whilst Robbie Temple returns for his 10th season with the Chichester club. Lauren Briggs will be starting her 5th year as Chichester’s leading lady player. 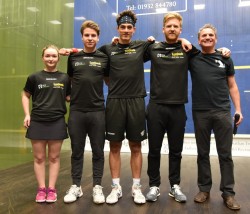 A big thank you to our sponsor Mike Palmer of Nine Telecom for supporting St George’s Hill Squash once again .

We will be once again competing for the title, that has eluded us so far , this season and we are looking forward to some highly competitive matches.